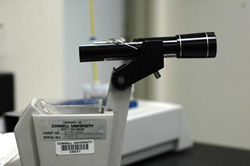 This is measured by refractometer and actually measures refractive index versus total protein. It is used as an estimate for total protein (which are the constituents of plasma that have the most effect on the refractive index). This is used as a quick guide as to potential mechanisms for anemia (e.g. a low total protein would support blood loss) or the presence of other disorders (e.g. a very high total protein, with accompanying rouleaux formation in erythrocytes indicates hyperglobulinemia, which may be due to inflammation or B or plasma cell neoplasia). This quick assessment is not always provided on hemogram results. Remember that this assessment is done on plasma (which contains fibrinogen), so values are usually higher than that seen on chemistry panels run on serum (which lacks fibrinogen). More accurate values for total protein are obtained from our chemistry analyzer and chemistry panels. 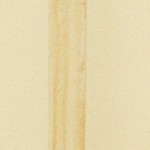 Scoring line for a microhematocrit tube

To perform this test, a microhematocrit tube is filled with EDTA-anticoagulated blood using capillary action. The tube is then sealed, placed in a microhematocrit centrifuge, centrifuged for 3 minutes (or longer) and then removed from the centrifuge. The tube should consist of packed red blood cells (at this stage, a packed cell volume or PCV can be measured), the buffy coat (platelets and WBC) and overlying plasma (the color/nature of the supernatant plasma can be visually assessed – see below) (see image to right). Ideally plastic microhematocrit tubes (which cannot be broken, e.g. SAFE-CAP® plain capillary tubes) and a plasma-expeller (e.g. SAFEPETTE® dispenser), which transfers the plasma to the refractometer should be used. However, these are not always available and glass microhematocrit tubes can be used. If a glass tube is used, the tube can be “scored” above the buffy coat, using a diamond pen or the side of a microscope slide, i.e. the pen or side of the slide is used to create a scored line in the tube (see image to right). The tube should then be able to be cleanly broken at the scored line (if the line is scored well enough – sometimes the tubes break during scoring). The unbroken end of the tube containing plasma is then placed at the interface of the refractometer lid (closed as shown in the top image) and refractometer transferring the plasma to the window by capillary action or gently tapping the end of the tube to the interface (try to avoid tapping the tube directly onto the glass window as this will damage the glass). The refractometer plate is then closed on top of the plasma and the interface between the light and dark regions is identified through the visualization window. This should be a sharp line. The corresponding number at the interface is equivalent to the value for total solids. Note, that this method (using glass tube and scoring the tube) is not recommended due to safety concerns. Also, NEVER blow on the end of the tube to remove the plasma (major major biosafety hazard, let alone getting cut on the glass). For more on measurement of total protein by refractometer, refer to a review by George 2001. 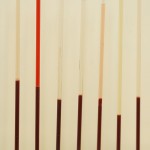 The gross appearance of the plasma in the microhematocrit or centrifuge tube can provide useful information, quickly and reliably.