Bicarbonate is the major extracellular buffer in the body. It is present in all body fluids and can be generated from CO2 and H2O in the presence of carbonic anhydrase. Bicarbonate on the chemistry panel gives an indication of acid-base status, but does not replace blood gas measurement as it does not supply information about the respiratory component of acid-base status or the pH of the animal. Bicarbonate values on a chemistry panel should always be interpreted with the anion gap, which is a calculated result, and the corrected chloride. The anion gap and corrected chloride provides useful information for delineating causes of metabolic acidosis (loss or titration of bicarbonate) and can give you an indication of a mixed acid-base disturbance. Note, that this page refers to bicarbonate measurement with the chemistry analyzer and not a blood gas analyzer. For the latter, refer to laboratory detection page.

The following method is used at Cornell University to measure bicarbonate on our automated chemistry analyzer.

This is a two step reaction that starts with phosphoenolpyruvate carboxylase (PEPC) catalyzing the oxidation of phosphoenolpyruvate (PEP) to oxaloacetate, in the presence of HCO3–. This first reaction is coupled to a second reaction that involves the transfer of a H+ from an nicotinamide adenine dinucleotide (NADH) analog to oxaloacetate using malate dehydrogenase (MDH). The lowered levels of  NADH analog causes an absorbance decrease at 415 nm, which directly correlates to the concentration of HCO3– in the sample.

The reactions are illustrated below:

The concentration of bicarbonate is is expressed in mEq/L (conventional units) and mmol/L (SI units). The conversion formula is essentially one to one or as shown below:

Sample type for measurement on a chemistry panel

Sample type for measurement on a blood gas panel

Heparin (lithium is usually used, but sodium or ammonium heparin can also be used) 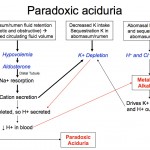 Increased levels of bicarbonate usually indicates a metabolic alkalosis and is usually secondary to chloride depletion, i.e. will be associated with a corrected hypochloremia (chloride disproportionately lower than sodium). 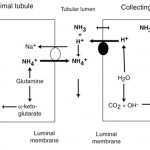 Unless there is clear evidence of sample collection or storage issues or a respiratory disorder that would cause accumulation of CO2, low bicarbonate is presumptive evidence of metabolic acidosis. Diseases that cause loss or titration of HCO3– must then be considered. Evaluation of the anion gap and corrected chloride concentration helps distinguish between these causes of a metabolic acidosis, although both may be occurring concurrently resulting in a mixed acid-base disorder. Metabolic acidosis is the most common acid-base disorder encountered in veterinary practice.