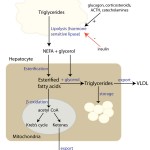 Non-esterified (“free” or unsaturated) fatty acids (NEFAs) are the major component of triglycerides (the fat stores in the body), which consist of three fatty acids linked to a glycerol backbone. In healthy animals (when they are eating or not in energy-deficient states), normal NEFAs mainly come from breakdown of triglycerides ingested in the diet through chylomicrons (lipoprotein lipase liberates NEFA off chylomicron remnants). However, under fasting conditions or states of negative energy balance, the main source of NEFA is hydrolysis of fat stores in the body and NEFAs are used primarily as a marker of negative energy balance.

Hydrolysis of stored triglycerides (fat) in adipose tissue by hormone-sensitive lipase liberates NEFAs and glycerol. Hormone-sensitive lipase (which is found within the cytosol of adipocytes) is stimulated by various hormones, including glucagon (which is released from α-cells in pancreatic islets in response to low glucose) and corticosteroids. Once liberated from fat or chylomicrons, NEFAs can be used as an energy source by many tissues, including skeletal muscle and hepatocytes. In hepatocytes, their fate differs depending on energy needs, hormone balance and substrate availability, i.e. they can be used for energy production (via Kreb’s cycle), re-packaged into triglycerides and exported as very low density lipoproteins (VLDL) or stored within the liver as triglycerides (which in excess can cause hepatic lipidosis) or converted to ketones.

The primary method for measuring the concentration of NEFAs in serum is a colorimetric enzymatic method, which is the method used at Cornell University.

In the first step of this three stage reaction, acyl-CoA synthetase (ACS) catalyzes the acylation of NEFAs to (coenzyme A) CoA resulting in the formation of acyl-CoA.  Hydrogen peroxide is then generated from the oxidation of acyl-CoA through the catalytic action of acyl-CoA oxidase (ACOD). Lastly, hydrogen peroxide in the presence of peroxidase (POD) allows for the oxidative condensation of 4-aminoantipyrine with 3-methyl-N-ethyl-N-(β-hydroxyethyl)-aniline (MEHA) to form a blue-purple end product with an absorbance maximum at 550 nm. NEFA concentration is directly proportional to the measured optical density of the dye product.

Reactions are shown below:

The concentration of NEFAs is measured in mEq/L (conventional units) or mmol/L (SI units). The unit conversion is obtained from the following formula:

Serum or EDTA plasma. Serum/plasma should be separated from cells ASAP after collection and the serum/plasma placed in a separate tube. Similarly, corvac (serum-separator) tubes are not recommended, because values are slightly (but significantly) higher in these tubes compared to non-anticoagulant (red top) tubes.

EDTA. Values are less stable in heparin, which also yields higher baseline concentrations than EDTA or serum and NEFA values increase with storage (Stokol and Nydam 2005).

NEFA testing is mostly done in dairy cattle to determine if the herd is in excessive negative energy balance. It is used more as a herd level than individual animal level test and results are interpreted with respect to a cut-off concentration or percentage of animals with values above the cut-off versus values above the upper reference limit. NEFA measurement can be done in any other species as a marker of excessive negative energy balance. This is most frequently done in camelids (which develop hepatic lipidosis under these circumstances), other ruminants (e.g. goats, sheep) to determine if they are at risk of ketosis, and horses (with equine metabolic syndrome). Note that concentrations below the reference limit are not clinically relevant.