The sent smears along with direct and sediment smears made in the laboratory from the submitted fluid were  highly cellular and comprised of 61% macrophages/synovial lining cells, 17% eosinophils, 16% small lymphocytes and 6% non-degenerate neutrophils (Question 1, Figures 1-3). The macrophages were predominantly quiescent, but occasionally displayed phagocytosis of eosinophils (Figure 3) and eosinophil granules (Figure 2). The stippled purple proteinaceous background contained small amounts of blood and a few free eosinophil granules. Windrowing (lining up of cells in the smear) was subtle, consistent with the visual estimate of decreased fluid viscosity. A few protein crescents were also noted, compatible with the high protein concentration on the refractometer. No microorganisms were observed.

Eosinophilic synovitis is a rare phenomenon in veterinary medicine. In human medicine, it is also a rare finding and has been observed with immune-mediated, infectious and non-infectious causes. Some of the conditions associated with eosinophilic synovitis include trauma, allergic reactions, osteoarthritis, urticaria, angioedema, immune-mediated (e.g. rheumatoid arthritis), parasitic (e.g. filarial migration) or bacterial (Borrelia burgdorferi, tuberculosis) infection, hypereosinophilic syndrome and dermatographism (an allergic-like reaction to pressure on the skin, e.g. scratches). Eosinophilic inflammation can also be seen in joints after injection of air or contrast media for arthrography or treatment with radiation.1–4 The classification of idiopathic eosinophilic synovitis is used when a cause is not identified.5

In small animals, there are only two reports of eosinophilic synovitis in a dog and cat.6,7 In the dog, multiple joints were affected and joint fluid analysis yielded a total nucleated cell count (TNCC) that ranged from 3,000-5,300 cells/uL, of which 20-55% were eosinophils.6 In the cat, only a single joint was affected with a TNCC of approximately 13,000 cells/uL of which 35% were eosinophils.7 In both cases, a cause was not found and the animals responded to supportive care and anti-inflammatory drugs with no apparent relapse at follow-up examination.

In large animals, eosinophilic synovitis has only been reported in horses.2,8,9 In one of the case reports, the described horse has a monoarthropathy (right carpus: antebrachial carpal and mid carpal joints) after a post-racing, intra-articular injection with methylprednisolone acetate. The TNCC in the joints ranged from 8,300-9,200 cells/uL, of which most cells were large mononuclear cells (~75%) with eosinophils comprising between 11%-20% of the cell population,2 similar to the current case. As in our case presented here, macrophages were described to have phagocytized eosinophil granules (Figure 2, insert).2 In a case series of three horses, a monoarthropathy was experimentally induced after intra-articular injection with purified streptococcal M-protein into the intercarpal joints.8 Two of the 3 horses had an eosinophilic component to the joint effusion. The TNCC in the synovial fluid from these two horses ranged from 47,000-163,000 cells/uL, but the cells were primarily neutrophils (71-81%) with only 1-2% eosinophils.8 The two horses with eosinophils in their joints had more severe lameness, but the TNCC did not correlate with the presence of lameness in the 3 horses. In the most recent reported case of eosinophilic synovitis, a cause or triggering agent was not found.9 The horse developed sudden lameness in the right tarsocrural joint. The joint fluid had a TNCC of 12,800 cells/uL with eosinophils comprising 76% of the cells.9 In all of the above described reports, joint lavage significantly improved clinical discomfort or lameness. Some of the horses did require administration of anti-inflammatory or immunosuppressive drugs for complete resolution of clinical signs. None of the horses had recurrence of disease or further complications, which suggests that eosinophilic synovitis most commonly affects single joints and is a self-limiting disease in this species.2,8,9 A compilation of the data reported in horses with eosinophilic synovitis is provided below. 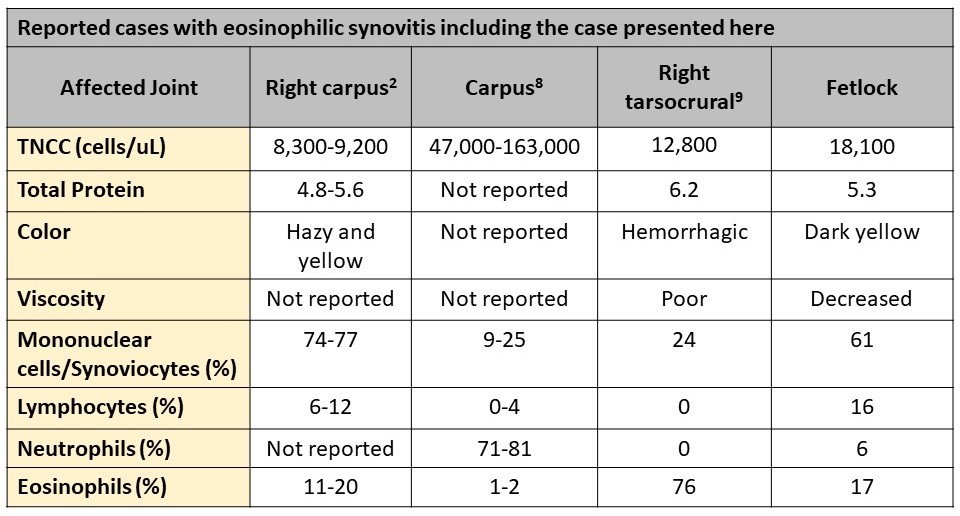 In all the reported equine cases, there was histologic evidence of a mixed inflammatory infiltrate within the synovium (synovitis), which included variable numbers of eosinophils, macrophages, lymphocytes, plasma cells and, to a lesser degree, mast cells.2,8,9 The inflammatory cells were often cuffed around vessels.8 Other histologic findings included synovial cell hyperplasia and, to a lesser degree and consistency, edema and necrosis.2,8,9 It is interesting that mast cells have been documented to infiltrate the synovium during the disease process, since a mast cell tumor was considered a possible differential for the eosinophilic infiltrate in the case presented here (Question 3). Nevertheless, mast cell tumors that involve the synovium in horses do incite an eosinophilic tenosynovitis but are usually associated with tendon sheaths. Mast cell tumors are rarely reported to cause eosinophilic inflammation within joints.10,11

Eosinophils are key responders in parasitic infection and are regulators of inflammation and type I hypersensitivity reactions.9,12 Eosinophils respond to multiple cytokines (e.g. interleukin [IL]-5) and immune complexes and can recognize certain antigens. Eosinophils degranulate upon stimulation, releasing powerful substances, such as major basic protein, eosinophil cationic protein, eosinophil-derived neurotoxin and eosinophil peroxidase. These substances are specifically engineered to modulate inflammation and deal with parasitic and other microbial organisms. However, if degranulation is not properly regulated, granule contents can cause substantial tissue damage and perhaps, exacerbate tissue inflammation by injuring healthy tissue.12 It is not surprising to see that the reported equine cases of eosinophilic synovitis improved clinically after lavage of the affected joint. This procedure may not only remove the potential eliciting agent(s), but will also reduce eosinophil chemoattractants and dilute or remove the highly reactive eosinophil granules.9

An eosinophilic infiltrate represents an inflammatory reaction to various processes, including parasitic (e.g. habronemiasis, cuterebrosis, any migrating filarial worms) and non-parasitic (e.g. foreign material, immune-mediated, idiopathic) stimuli. Eosinophils can also be part of a paraneoplastic process (e.g. mast cell tumors or T-cell lymphoma). The syndrome of equine multisystemic eosinophilic epitheliotrophic disease (MEED), which often involves the skin, gastrointestinal tract, respiratory system and other organs (see January 2017 Case of the Month), was not considered as a differential diagnosis (Question 3). This suspected immune-mediated disease has not been described to involve joints, although the complete clinical description for the patient presented here was not available.

Although some authors have suggested that the presence of eosinophils within the synovial space may represent an immunologic reaction against an injected foreign material,8 eosinophilic synovitis in horses has not been linked to date to a specific iatrogenic intervention. For example, in the case reported by Climent et al9, there was no history of a previous injection into the affected joint; only cartilage erosion was observed during arthroscopic examination. The latter erosive change suggests that trauma or degenerative changes, as reported in human medicine1, could trigger an eosinophilic infiltrate. Alternatively, it is possible that the eosinophils and their related enzymes were responsible for the observed cartilage erosion. Similarly, in this case, there was no provided history of an intra-articular injection. Lyme disease has been associated with an eosinophilic infiltrate in humans, whereas the inflammation is primarily lymphocytic in horses.3,13 The horse presented here did had a positive joint fluid culture for Enterococcus spp. and Streptococcus zooepidemicus. It is possible that a bacterial antigen, such as the streptococcal M-protein, could be responsible for the eosinophils in the joint fluid of the case reported herein, similar to that described by Madison and colleagues after they injected purified streptococcal M-protein into equine joints.8 M-protein is a surface virulence factor expressed by some bacteria and viruses that inhibits phagocytosis by immune system cells (e.g. neutrophils, macrophages).14 This surface protein has been identified in Streptococcus pyogenes14 and Streptococcus equi.15 As a side note, Streptococcus equi is thought to have evolved from a Streptococcus zooepidemicus ancestor through gene loss and deletions, and genetic incorporation of mobile genetic elements from horizontally transferred genes.16,17 It is unknown if the cultured bacteria solve the mystery of the eosinophilic infiltrate in the horse presented here, as no further follow-up was available.