Agglutinates were evident in the blood smear and the upper middle and right hand box of the RBC cytogram from the ADVIA (Figure 1). Agglutination was confirmed with a saline dilution (diluting 1 part of the EDTA-anticoagulated blood with 9 parts of 0.9% saline and then examining a wet mount of the diluted blood under light microscopy). 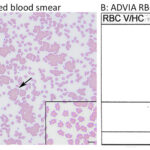 Figure 1: Agglutination in a smear and RBC cytogram

Agglutination could be due to (Question 2):

In this case, additional testing revealed that it was EDTA-dependent pseudo-agglutination (see below).

We also performed flow cytometric analysis on the EDTA- and citrate-anticoagulated blood samples from the cat and an EDTA-anticoagulated blood from a control cat to determine if there were antibodies bound to the RBCs. For this analysis, the diluted RBCs were incubated with fluorescein-isothiocyanate (FITC)-conjugated goat polyclonal anti-cat IgG-Fc and IgM antibodies (Bethyl Laboratories Inc., Montgomery, TX, USA) at four dilutions (1:20; 1:40; 1:80; 1:160), with a FITC-conjugated goat polyclonal antibody (not targeted against any antigen) as a negative control. The RBCs in the EDTA- and citrate-anticoagulated blood from the cat were strongly and weakly positive for IgM, respectively, at all dilutions. In contrast, RBCs from the control cat were negative for IgG and IgM (Figure 3). The negative control did not bind to the RBCs, as expected.

The increased blood urea nitrogen concentration on presentation had resolved after 48 hours of intravenous fluid therapy, however the creatinine concentration was still mildly increased, consistent with the prior diagnosis of chronic kidney disease. Correction of the dehydration revealed a more severe anemia than initially detected at point-of-care. The anemia in the cat was attributed to the chronic kidney disease. The metabolic acidosis at presentation could be explained by a combination of L-lactic acidosis, secondary to hypovolemia and anaerobic metabolism, and decreased excretion of acids by the diseased kidney. The increased AST and CK activities indicated mild muscle injury.

Anticoagulant-dependent hemagglutination is a rare phenomenon in humans and domestic animals. To our knowledge, there has only been one report of EDTA-dependent hemagglutination in animals, which was also a cat from our institution.7 Despite the anemia, artifactual agglutination was suspected in this case due to the lack of other clinical, biochemical or morphologic indicators of in vivo agglutination from an immune-mediated anemia, such as spherocytosis (albeit difficult to recognize and confirm in cats), ghost cells (if there was an intravascular component to a hemolytic anemia), and bilirubinemia. However, these features may not always be present in an IMHA). In addition, the anemia was not regenerative and was attributed to inflammatory disease as would be expected in a classic IMHA, where the bone marrow has had time to respond to the anemia and is not concurrently suppressed by other conditions, e.g. inflammatory disease.

In humans, anticoagulant-dependent RBC agglutination is a rare and poorly described phenomenon that is attributed to the binding of naturally occurring IgM antibodies to suspected hidden epitopes on RBC surface antigens (cryptoantigens), including universal blood group antigens. However, the mechanism of EDTA-dependent agglutination remains unclear, with speculated roles for calcium and polycarbonate groups, although this may be antibody-dependent.8-10 In one report, agglutination was induced by chelating calcium with EDTA and was reversed by addition of 0.5 mM calcium, but not by other positively charged ions, such as magnesium.8 However, another report showed that agglutination could be reversed by addition of magnesium chloride.9 EDTA may not be required for agglutination because deprotonated poly- and monocarboxylic acids could also induce agglutination.10 In both this cat and our previous reported case,7 we found that agglutination only occurred in samples containing EDTA, although RBC-bound IgM was still detected by flow cytometric analysis in the absence of EDTA (citrate- and heparin-anticoagulated blood in our previous case7 and citrate-anticoagulant in the case herein). These results suggest that the IgM antibody is bound to RBCs independently of the anticoagulant, but that EDTA induces stronger binding and subsequent agglutination. The agglutination may be calcium independent in this cat, because it was not evident in a blood smear or the ADVIA cytogram in citrate-anticoagulated blood (citrate also chelates calcium albeit being a more “gentle” chelator than EDTA). However, we did not spike the EDTA-anticoagulated sample with exogenous calcium to determine if this could reverse the agglutination. The results of our two cases and previously published reports suggest that antibody binding or avidity is charge dependent. EDTA by virtue of being a strong cation chelator could increase the negative charge of the antibody or antigen by chelating positively charged ions that are normally bound to and neutralize the charge on carboxylic acid groups of the proteins. This would explain the observation that other negatively charged molecules, such as deprotonated carboxylic acids,9 can induce agglutination without EDTA and prior chelation of calcium in the sample reduces the amount of EDTA required to induce agglutination.9 In addition, the agglutination reaction is pH-dependent,8-9 which may also be a charge-associated phenomenon. However, this theory remains to be tested. As we speculated for our previous case,7 it is also possible that the IgM antibody in the cat of this report is of low avidity and that EDTA modifies the RBCs or antibody to promote stronger binding in a charge-independent manner.

Aside from the two cats now reported, the only other anticoagulant-dependent agglutination of RBCs that has been described in animals occurs in horses, some of which develop in vivo hemagglutination following treatment with parenteral heparin, particularly unfractionated heparin.11-13 Affected horses have decreased packed cell volumes/HCT and RBC counts, but do not appear to have a hemolytic anemia. Thus, the agglutination is of unclear pathologic relevance. The mean cell volume can also be increased in these horses, particularly when their blood is assayed with impedance-based hematologic analyzers (agglutinates are counted as single large RBCs). The mechanism behind the in vivo heparin-induced agglutination is unknown, but is likely distinct from the EDTA-induced in vitro phenomenon in  our two feline cases and the other reported examples of anticoagulant-dependent RBC agglutination. In this cat, the hemoglobin concentration largely matched the HCT from the analyzer (hemoglobin concentration x 3 = 20; HCT of 19%), indicating that the agglutination was not substantially affecting the RBC results, including the MCV, nor contributing to the more severe anemia after rehydration. In addition to agglutination of RBCs, other EDTA-dependent agglutination anomalies that have been described in humans affect platelets, neutrophils, and lymphocytes. EDTA-induced agglutination of platelets has been rarely described in horses, a single dog, and a miniature pig.14-18

It is important to recognize the possibility of in vitro or artifactual agglutination as our previously reported case was erroneously treated with immunosuppressive doses of corticosteroids, because the marked agglutination led to a presumptive diagnosis of IMHA.7