The smears were markedly cellular with mixed inflammatory cells and erythrocytes, along with numerous smudged cells and necrotic cytoplasmic and karyorrhectic debris. Inflammatory cells were predominantly granulocytes and macrophages with fewer lymphocytes (Question 1). Granulocytes were variably degenerate with cytoplasmic vacuolation and nuclear karyorrhexis. Some were also hypersegmented. Moderate numbers of protozoal organisms (trophozoites) were observed both extracellularly (Figures 1 and 2) and phagocytized within the cytoplasm of macrophages (Figure 3). Protozoa were pyriform to rounded, 8-10 μm long and 2-3 μm wide with flagella originating from both the anterior and posterior poles. Six anterior flagella and two posterior flagella were present. A bilobed to reniform hyperchromatic nucleus was present at the anterior pole. Occasional organisms had two anterior nuclei. The cytologic results indicated a protozoal infection, with cytologic features compatible with Spironucleus. 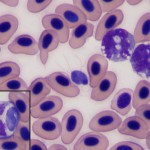 The aspirated fluid was submitted for bacterial, viral and fungal culture, the results of which were negative. Sections of the cyst margin and adjacent skeletal muscle were collected and fixed in 10% neutral buffered formalin, embedded in paraffin and sectioned for histopathologic examination. Within the skeletal muscle, there were several, variably sized, coalescing foci of liquefactive and coagulative necrosis, fluid-filled cysts lined by granulomatous inflammatory cells and multifocal smaller granulomas within the adjacent muscle wall. Cysts were filled with necrotic debris, proteinaceous fluid and multifocal sheets of fibrin. Rafts of necrotic skeletal muscle, that were frequently mineralized, were suspended within the cystic fluid. Lining the cyst were sheets of large foamy histiocytes, fewer lymphocytes and granulocytes with rare pyriform, eosinophilic, 8 x 10 μm protozoa with faint anterior nuclei, similar to those noted in the cytologic preparations. Macrophages frequently infiltrated and replaced necrotic myofibers. Maturing fibroplasia and neovascularization (granulation tissue) surrounded the peripheral margin of the cyst and minimally dissected into the adjacent skeletal muscle. In the adjacent less affected skeletal muscle, approximately 30% of myofibers were shrunken with hypereosinophilic, occasionally vacuolated cytoplasm that lacked striations and contained occasional internal nuclei (myofiber degeneration). The histologic diagnosis was a severe multifocal to coalescing, chronic, necrotizing and pyogranulomatous myositis with intralesional Spironucleus protozoa. Blood films prepared from anticoagulated blood and stained with Wright’s stain also contained low numbers of trophozoites which were present extracellularly and within phagocytic vacuoles in leukocytes (Figure 4).

Spironucleus is an emerging disease in Chinook salmon in New York State. Spironucleus is a well recognized pathogen of Atlantic salmon (Salmo salar) and Arctic Char (Salvelinus alpinus) in Scandinavia, producing systemic infections in market sized adult fish.1-3 Spironucleus infections have also been reported in Chinook salmon in British Columbia, Canada.4 Massive systemic and intracellular infection of Salmon resulted in the destruction of 640 tons of Salmon in a Norwegian outbreak in 1992.1

Cytologic features that identify these organisms as Spironucleus include the pyriform shape, size (approximately 6-12 x 2-4 μm), lack of undulating membrane, the presence of 6 anterior and 2 posterior flagella and an anterior folded nucleus. Intracellular infection with Spironucleus barkhanus has been described.3 No intracellular forms were noted in this case aside from those within the cytoplasm of macrophages and peripheral blood monocytes, which were presumed to be phagocytized. Cystic forms of Spironucleus can occur in mucus in the intestinal lumen; these are characterized by a rounder shape, thin cell wall, two nuclei and absence of flagella.7 There were rare forms of the organisms within the submitted smears that were round and lacked obvious flagella. We speculated these may represent the cyst form of Spironucleus, however, this form has not been reported in previous reports of Spironucleus infections in fish. The histopathologic findings of a necrotizing and granulomatous myositis with few Spironucleus trophozoites within the center of cystic lesions, supported the cytologic diagnosis. This is an unusual protozoan in an unusual species with only few reports in the literature.