Serum protein electrophoresis (SPE) separates proteins into multiple bands based on the size and charge of the protein. Each band on the SPE gel represents one or more proteins with similar size and charge characteristics. Albumin is the most abundant single protein in serum and forms a single distinct band in the gel. The globulins are further separated, usually into 3-5 bands, depending on the species. These bands are designated α1, α2, β1, β2, and γ. 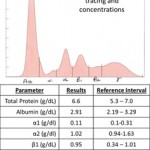 SPE is most commonly performed to distinguish between hyperglobulinemia caused by an innate and/or acquired immune response (i.e. an acute-phase response and/or “polyclonal gammopathy”) from hyperglobulinemia caused by the neoplastic proliferation of a clone of a B lymphocytes or plasma cells (“monoclonal gammopathy”). Serum protein electrophoresis is not typically useful in cases of hypoproteinemia. Electrophoresis is not the appropriate method for quantifying individual immunoglobulins or immunoglobulin levels against a specific antigen (e.g. infectious agents).

Electrophoresis can also be performed on other fluids, including urine (the preferred technique for identification of Bence-Jones proteins in animals with suspected multiple myeloma), body cavity fluids (e.g. peritoneal fluid for supporting the diagnosis of Feline Infectious Peritonitis Virus) and cerebrospinal fluid (for various neurologic diseases).

Electrophoresis separates proteins of body fluids into multiple bands. The procedure begins with applying an aliquot of the serum to a gel. Cellulose acetate and agarose are the most common gels used in clinical laboratories, and the latter currently is used at the Clinical Pathology Laboratory at Cornell. The gel contains an alkaline buffer, and in this environment, all the proteins have a negative charge of different magnitude. A strong electrical current then is passed through the medium for a set time period. During this time the proteins migrate from the application point toward the positively charged anode for varying distances related to their charge, size, and shape. More than one type of protein may migrate to the same location in the gel (therefore, one peak may contain many different proteins). Albumin has the strongest negative charge in the alkaline gel environment and is one of the smallest proteins in serum. Due to the charge and small size, albumin migrates the furthest. Large and more weakly charged proteins, such as the immunoglobulins, may migrate very little within the electrical current.

After a set period, the gel with the separated proteins is removed and immersed in a solution which stains the protein. Several stains can be used, which have different affinities for the proteins in serum, e.g. colloidal blue, sudan black, acid blue. These stains may give different results or may highlight different bands, therefore the same method should be used when comparing results in an individual patient. At Cornell University, we use acid blue for staining the gel. Clearing the gel in acetic acid reveals a series of bands at different positions; the width and density of the bands depends on the amount of proteins with that particular electrophoretic mobility. After drying, the gel can be inspected visually for the distribution of bands. Each band on the gel represents one or more proteins with similar size and charge characteristics. Albumin is the most abundant single protein in serum and forms a single distinct band in the gel. The globulins are further separated into as many as 12 bands, depending on the species and the underlying disease processes. These bands are assigned into groups or fractions typically designated α1, α2, β1, β2, and γ, based on their location relative to albumin (α globulins are right next to albumin with γ globulins being the furthest away from albumin).

The gel is then placed in an instrument, called a densitometer, which determines the amount of protein in each band by its absorbance of light. The densitometer translates this information into a series of peaks called an electrophoretogram. The technologist and clinical pathologist make the (somewhat subjective) decision of how to divide the peaks into the several fractions. The area under each peak is proportional to the percentage of that fraction in serum. The concentration of protein in each fraction in serum is determined by multiplying the total protein concentration of the fluid (obtained from the chemistry analyzer, by the Biuret reaction) by the percentage value of each fraction (i.e. absolute protein fraction in g/dL = total protein in g/dL x % from densitometer). The absolute values are then compared to reference intervals for the concerned species, if available.

The contents of the alpha, beta, and gamma bands in serum protein electrophoresis are quite varied, but in most species the most clinically relevant ones can be summarized as follows:

The shape of the electrophoretogram tracing and the quantity of protein in the different fractions provides information about the underlying disease, i.e. interpretation of electrophoresis results are both qualitative and quantitative – the pattern of changes in the tracing are interpreted with the absolute results and reference intervals for the species (if available). At Cornell University, we currently have reference intervals for dogs, cats, horses, cattle, and alpacas. For other species, we refer to the literature for a guide to help us interpret the changes.

In healthy animals, there is abundant albumin, small amounts of α and β globulins and a mixture of immunoglobulins, which produces a small broad curve in the γ-region In general, we recognize the following disease processes in an electrophoretogram (see above tracing): 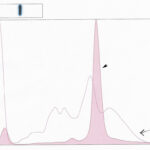 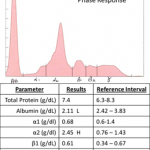 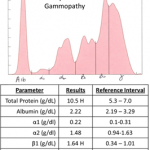 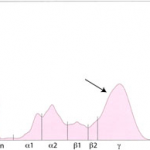 Polyclonal gammopathy in a cat with gingivitis

Inflammation, infection or antigenic stimulation of any cause (e.g. chronic liver, respiratory , gastrointestinal, or dermatologic disease) can induce the secretion of mixed immunoglobulins. Immunoglobulins migrate in the γ and β regions (most isotopes of IgG migrate in the γ peak; IgA and IgM migrate in the early γ and extend into the β peak).  Immunoglobulins produced by lymphocytes and plasma cells in immune responses are from a variety of lymphocyte or plasma cell clones and include a variety of immunoglobulin classes. Therefore, they tend to migrate to slightly different points on the electrophoretogram, resulting in an increased concentration of γ (and also usually β) globulins, with peaks in the β and γ regions of the tracing that are taller than normal and wider than the albumin peak at both the base and (to some extent) the tip. Such broad-based peaks in the γ region are described as polyclonal gammopathy.

The typical findings on SPE of a polyclonal response are:

Some diseases can produce a concurrent acute-phase response and a polyclonal gammopathy, e.g. Feline Infectious Peritonitis Virus infection in cats, Leishmania infection in dogs, systemic inflammation. In these cases, you will typically see the following ELP pattern: 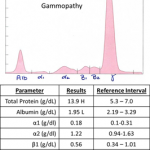 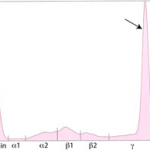 Immunoglobulins produced by a single clone of B lymphocytes or plasma cells typically forms a tall narrow peak in the β- to γ-region (depending on the involved immunoglbulin). This is called a monoclonal gammopathy. A monoclonal gammopathy is usually due to the following:

In these cases, measurement of the involved class of immunoglobulin is indicated since it does provide additional information. B-cell tumors usually produce IgM or IgG monoclonal gammopathies, whereas IgG or IgA monoclonal proteins are typically secreted by plasma cell tumors. Furthermore, the uninvolved immunoglobulins are usually decreased (secondary immunodeficiency) in patients with these neoplasms, which can help differentiate a true monoclonal expansion from a restricted oligoclonal or a “monoclonal-like” expansion secondary to an infectious agent (in which the involved immunoglobulin is usually IgG and immunoglobulin A and M concentrations are not usually decreased). 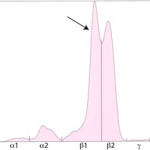