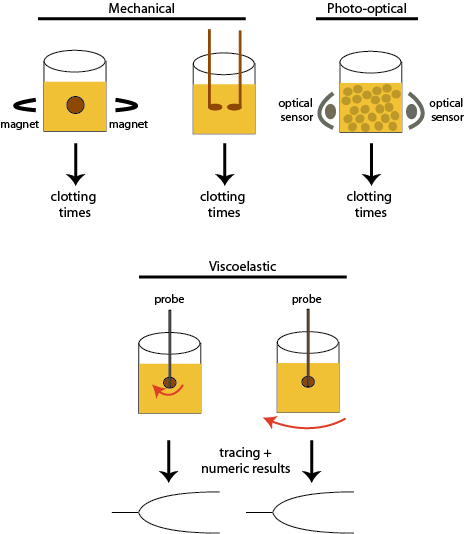 Most screening coagulation assays are based on how rapidly fibrin clots form in patient samples. There are different methods to detect the formation of fibrin in these assays, including visual, mechanical,photo-optical and viscoelastographic techniques, which are shown above.
Mechanical: There are different mechanical methods, but these are either based on movement of a metal ball between two magnets or the movement of two probes inserted within the patient sample. Fibrin formation restricts movement of the magnetic ball or movement of the probe in relation to each other, resulting in a finite endpoint, which is recorded as the clotting time.
Photo-optical: With this technique, fibrin formation is detected by the change in optical density or turbidity of the sample. The results are usually recorded as the time to clot, however some analyzers also provide a curve of clot formation.
Viscoelastic: With this technique, a probe is inserted into a cup containing the patient sample. Then either the probe is rotated within the cup or the cup is rotated around a fixed probe. Changes in the movement of the cup in relation to the probe results in a tracing that reflects the kinetics of fibrin formation (shown above) and fibrinolysis (not shown), with numerical measurements pertaining to these kinetics and the strength of the resulting fibrin clot. 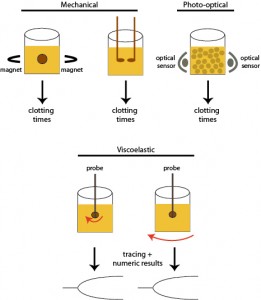