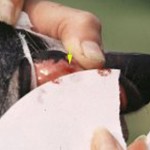 Specific lancets are need to perform a BMBT. These produce a standardized cut in the mucosa, the depth of which are sufficient to provoke (and thus evaluate) platelet plug formation but are not deep enough to necessitate fibrin formation, making the test specific for primary hemostasis (as long as it is performed properly). There are two spring-loaded lancet devices, the Surgicutt® or Simplate II®. Surgicutt devices also come with lancets  for adults and children (including neonates). These lancets differ in the length and depth of the incision. The Simplate II produces two incisions that are 6 mm long x 1 mm deep. The Surgicutt Adult and Junior produce single cuts that are 5 or 3.5 mm long, respectively, and 1 mm deep, whereas Surgicutt Newborn produces a single cut that is 2.5 mm long and 0.5 mm deep.

To perform the BMBT, the upper lip is folded up and secured with a gauze strip tied around the maxilla or around both the maxilla and mandible. A small incision is made in the mucosa above the premolars using the desired device. Areas with visibly engorged vessels should be avoided (the gauze strip is likely too tight if vessel engorgement is obvious). Blood that wells up from the incision is blotted with filter paper applied near (but not touching) the incision. A stopwatch is started when the incision is made and stopped when a crescent of blood no longer develops on the filter paper. Ideally, the same person should perform the BMBT to minimize variability (which is still very high)

The BMBT is mostly used as a screening tool for primary hemostasis. It is usually not done as a first line test for any particular disorder (it is insensitive and not specific for any particular disorder of primary hemostasis), but is only performed in animals with bleeding attributable to a primary hemostatic defect (usually mucosal bleeding) but with normal platelet counts, coagulation screening tests (PT, APTT, TCT) and vWf:Ag concentrations, i.e. it is used to detect a possible thrombopathia (platelet function defect). However, due to the variability of the test, results should be interpreted with caution and should be verified by more specific testing. Platelet function analyzer testing is preferable to the BMBT, but the latter is often the only available test for general practitioners. The BMBT is also not predictive of surgical hemorrhage, therefore its use for this purpose is not recommended. Only prolonged BMBT are clinically relevant.

Reference intervals for BMBT have been established for dogs and cats but are device specific (Aumann et al., 2013).

The test is crude and quite subjective, and has poor repeatability (high intra-observer and inter-observer variability). Indeed, the BMBT can vary by as much as 80 to 87 seconds in an individual dog and cat, even when performed by a single observer (Sato et al 2000, Alatsaz et al 2014). The low reproducibility is likely due to the following technical variables:

The BMBT tests primary hemostasis, i.e. platelets (number and function), vessel wall defects (which are quite rare) and vWf (amount and function). When done properly, a BMBT is normal in disorders of secondary hemostasis, including hemophilia A or B, and anticoagulant rodenticide toxicosis.

Prolonged BMBT could reflect any of the following disorders:

Further information on the BMBT is provided by the Comparative Coagulation Laboratory of the AHDC.