Inherited thrombopathias should be suspected in a young animal with a bleeding disorder, but showing normal results on coagulation testing (platelet count, PT, APTT, fibrinogen). The buccal mucosal bleeding time as a global test of primary hemostasis may be prolonged in affected patients.

This defect is due to a deficiency or abnormality in the GPIb-IX-V complex and results in thrombocytopenia with macroplatelets. Since the complex is required for platelet adhesion to von Willebrand factor under high shear rates (vWf), affected platelets show defective adhesion, but can aggregate normally to usual platelet agonists, such as thrombin (aggregation may be mildly reduced in some human patients) and ADP. However, the snake venom, ristocetin, binds to GP1b-IX-V and triggers platelet aggregation in the presence of vWf. Ristocetin-induced platelet aggregation was used as a functional test for von Willebrand disease, but decreased aggregation in response to ristocetin will also be seen in Bernard Soulier syndrome. The syndrome has been identified in a family of Cocker Spaniels, which demonstrated signs of repeated mucosal bleeding (gingiva, nose) associated with minor trauma (e.g. endoscopy) and post-venipuncture hematomas, manifesting between 2-4 years of age. Bleeding was mild, although severe episodes of hemorrhage did occur after whelping in one dog. The platelet counts in two affected dogs fluctuated between 49-125,000/uL and platelets were large (MPV 24-30 fL, normal usually <15 fL), resulting in a normal platelet crit on some sampling dates. The platelet mean component (granularity) was normal. One dog had a large deletion in the GPIX gene, resulting in a loss of GPIX expression on the platelet surface (Gentilini et al 2019).

Glanzmann’s thrombasthenia (also called thrombasthenic thrombopathia) is an autosomal recessive inherited platelet disorder. This has been recognized in Otterhounds and Great Pyrenees (Boudreaux and Lipscomb 2001) and various horse breeds (Livesey et al 2005, Christopherson et al 2006, Macieri et al 2011, Sanz et al 2011). The defect is due to absent or dysfunctional glycoprotein IIb/IIIa on platelets. GPIIb/IIIa is the platelet fibrinogen receptor and is essential for platelet aggregation (mediated by fibrinogen) and also mediates firm adhesion and spreading on collagen (mostly via binding to vWf, which is bound to collagen). Affected dogs have prolonged bleeding from minor wounds, spontaneous epistaxis and readily form hematomas at sites of injury or venipuncture. 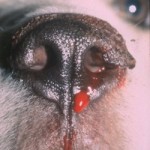 The dogs have a normal to mildly decreased platelet count, normal to increased mean platelet volume and a prolonged BMBT. Decreased platelet retention, absent platelet aggregation to collagen, ADP, platelet activating factor and thrombin, and decreased granule secretion are characteristic. Shape change does occur in response to platelet agonists. Clot retraction is abnormal which helps differentiate this disorder from Bassett Hound thrombopathia. The defect can be in the gene of either glycoprotein IIb or IIIa, as both molecules are required for proper receptor functioning. In both Otterhounds and Great Pyrenees, the defect is due to a genetic mutation that affects a calcium-binding domain of the extracellular portion of glycoprotein IIb (each breed has a different mutation) (Boudreaux and Lipscomb 2001).

A different disorder has been described in Thoroughbred horses. The expression of the fibrinogen receptor is normal however the receptor binds less fibrinogen and there is a defect in alpha granule secretion. The underlying defect responsible is unknown (Norris et al 2015).

The risk of bleeding in acquired diseases is more unpredictable and typically less severe than inherited disorders. Although abnormal platelet function occurs in these diseases, there may be other causes for the excessive hemorrhage seen in these conditions, such as thrombocytopenia.

Increased platelet function, which may predispose an animal to thrombosis, has been observed in dogs with lymphoma, nephrotic syndrome, and infectious agents (including Rocky mountain spotted fever, heartworm disease and Feline infectious peritonitis). In nephrotic syndrome, the hyperaggregability is thought to be secondary to increased free arachadonic acid availability (for thromboxane production) due to hypoalbuminemia (which normally binds free arachadonic acid).