Definition: Primary hemostasis is defined as the formation of the primary platelet plug. This serves to plug off small injuries especially in microvessels (< 100 μm) in mucosal tissues (respiratory, gastrointestinal, genitourinary tracts). Platelets are not only involved in platelet plug formation but are also crucial for formation of fibrin (secondary hemostasis). Activated platelets express a negatively charged phospholipid, phosphatidylserine (PS), on their surfaces, which is a binding site for the assembly of coagulation factor complexes. Assembly of these complexes on this surface markedly amplifies fibrin formation (called the propagation phase of secondary hemostasis). In addition, activated platelets also activate neutrophils, leading to NETosis or extrusion of nuclear material (Carestia et al 2016), which is strongly procoagulant and antifibrinolytic (Liaw et al 2015). 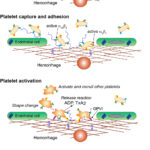 Sequence of events: Normally, the intact endothelium is a physical barrier separating circulating platelets from thrombogenic substances (such as extracellular matrix proteins) in the extravascular space. When the endothelium is injured, the procoagulant subendothelial matrix (consisting of proteins such as collagen, laminin, and fibronectin) is exposed and immediately initiates primary hemostasis, which consists of these events:

More detail on these three events is given below. 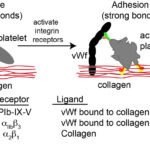 Upon endothelial injury, platelets bind to exposed subendothelial matrix proteins, such as collagen, with the aid of adhesion molecules or receptors on their surfaces. These receptors are transmembrane glycoproteins (GP) and are non-integrin or integrin receptors. Which receptors are involved in adhesion depends on the flow forces in the vessels. At higher shear rates, e.g. arterioles, platelets need to be slowed before they can firmly adhere, which is mediated by strands of vWf that unfurl from the subendothelial matrix or endothelial cell surface and allow platelets to transiently bind and roll, giving time for firm adhesion to occur via integrins. At lower shear rates, vWf is not required and firm binding can be mediated by the slower binding reactions of integrins on platelets with their ligands in the extracellular matrix. The main receptors involved in platelet capture/rolling and firm adhesion are the following:

This is mediated primarily by fibrinogen, which binds to the activated fibrinogen receptor (GPIIb/IIIa) on platelets. This links platelets together forming the primary plug. The platelet plug is sufficient to stop bleeding from most small blood vessels in response to every day trauma (e.g. eating) or venipuncture, however in larger vessels or with more severe damage, the primary platelet plug must be stabilized to cease the hemorrhage. This is accomplished through secondary hemostasis or fibrin production by coagulation factors. Also note, that platelets have roles beyond what has been described for hemostasis. For instance, it is now known that platelets are essential for vascular integrity. It is possible that hemorrhage in patients with thrombocytopenia is not only due to an absence of platelets but also to a loss of vascular integrity.

It is now known that platelets are not a homogeneous population. There are subsets of platelets that are either procoagulant (express PS, assemble coagulation factor complexes and propagate thrombin generation) or those that are adhesive and contractile and more likely to bind to extracellular matrix proteins and cause clot retraction (Agbani and Pool 2017). Even within the procoagulant category, there are subtypes of different platelets, such as ballooned or “coated” platelets, the latter of which are formed from the dual activation of collagen and thrombin and have serotonin-conjugated proteins on their surface, including fibrinogen and thrombospondin (Dale 2005). Procoagulant platelets require robust sustained internal calcium-mediated signaling and strong agonists, such as collagen which binds to the collagen receptor, GPVI, or thrombin, which binds to PARs. Calcium signaling activates calpain and chloride entry via the chloride channel, TMEM16F (which is defective in Scott syndrome), which are required for microvesiculation and irreversible ballooning, and PS exposure (Agbani and Pool 2017). Platelet subsets are also located in different parts of the developing thrombus, with the adhesive platelets being found closer to the vessel wall and the procoagulant platelets forming an overlying cap.

There are physiologic, pathologic and pharmacologic inhibitors of primary hemostasis. 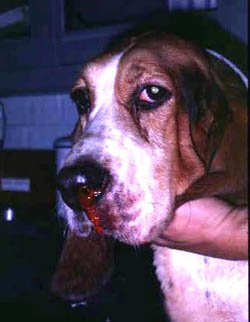 Epistaxis in a Bassett with inherited thrombopathia (photograph courtesy of Dr. Marjory Brooks)

A defect in any aspect of primary hemostasis can manifest as hemorrhage, typically from mucosal surfaces (the sites where the primary platelet plug is important due to rapid fibrinolysis). Hyperactivity in primary hemostatic components is a cause of hypercoagulability and a risk factor for thrombosis.

Please refer to the sample collection page for additional guidelines on how to collect samples appropriately to optimize hemostasis test results.

It is imperative that a platelet count is done in all animals presenting with clinical signs of excessive hemorrhage. Platelet counts can be quantified using automated analyzers or can be semi-quantified (estimated) from a well-prepared fresh blood smear. Additional platelet testing requires fresh blood or, preferably, referral of the patient to a testing center that is capable of performing advanced hemostasis testing. Few tests of primary hemostasis are available to general practitioners. These include a platelet count, a buccal mucosal bleeding time (BMBT), genetic testing for specific inherited disorders, and measurement of vWf concentrations.

Defects arise in any aspect of the hemostatic pathway. As indicated above, these defects can result in deficient hemostasis (hypocoagulability), which can result in excessive hemorrhage, or accelerated hemostasis (hypercoagulability), which can result in thrombosis. Disorders can also be inherited or acquired. Inherited conditions should be suspected in young animals presenting with episodes of recurrent hemorrhage or thrombosis. Acquired disorders are more likely in older animals with underlying disease. The most common inherited defect in primary hemostasis is von Willebrand Disease and thrombocytopenia is the most common acquired defect (there are multiple causes of thrombocytopenia).