Acquired thrombocytopenia, usually immune-mediated, is the most common hemostatic disorder encountered in private veterinary practice. A platelet count should be performed on every animal presenting with clinical signs of hemorrhage. Thrombocytopenia can be an artifact, iatrogenic (dilutional) or due to pathophysiologic causes, which affect the bone marrow (decreasing production) or peripheral  survival (consumption/usage, destruction/clearance, sequestration), as listed below.  Naturally, artifact must be considered each time we get a platelet count, which is why we examine the feathered edge and body of the smear for platelet clumps. Iatrogenic causes should be considered if the animal is being given substantial amount of fluid therapy. 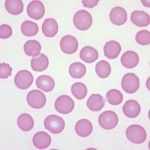 Blood smear from a dog with thrombocytopenia 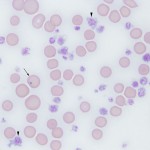 Thrombocytosis in a kitten

Thrombocytosis may occur in primary myeloproliferative conditions or as a secondary (reactive) phenomenon in a variety of physiologic and pathologic states. Thrombocytosis is usually due to an increase in platelet production and release (in reactive cases, this is likely due to increased thrombopoietin or other inflammatory cytokines, that stimulate thrombopoiesis or thrombopoietin release, such as interleukin-6, CCL5), rather than an increased platelet lifespan. Usually, a platelet count higher than the reference interval for the species is a reactive thrombocytosis and not of direct pathologic importance. In our experience, young animals, in particular calves and foals, normally have platelet counts higher than the adult reference interval. Inherited causes of thrombocytosis have not been identified in animals.