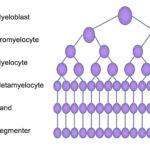 Neutrophils are produced in the bone marrow from the hematopoietic stem cell under the influence of neutrophilopoietic cytokines, such as granulocyte- (G-CSF) and granulocyte-monocyte stimulating factor (GM-CSF). These cytokines are produced by marrow stromal cells, including T lymphocytes (GM-CSF). Neutrophils are produced daily and normally have a circulating lifespan of <24 hours in humans (Lahoz-Beneytez et al 2016). In horses, a study with radioactively labeled chromium showed that the neutrophil lifespan was 10-11 hours (Carakostas et al 1981). Within the bone marrow, neutrophils are produced from hematopoietic stem cells, which form myeloblasts (common myeloid progenitor). Myeloblasts differentiate into progranulocytes (common progenitor for all granulocytes, i.e. neutrophils, eosinophils and basophils). The earliest identifiable neutrophil-specific precursor is the neutrophilic myelocyte, which is more mature than the progranulocyte. Neutrophilic myelocytes can be differentiated from eosinophilic and basophilic myelocytes because they have faint pink barely discernible granules (in dogs in particular) compared to eosinophilic and basophilic granules in the latter precursors, respectively. The myelocyte differentiates into a metamyelocyte then into a band neutrophil and finally a mature segmented cell. These stages are differentiated by the shape of the nucleus (round in the myelocyte, kidney bean-shaped in the metamyelocyte and horse-shoe shaped in the band neutrophil) as well as the location of the nucleus in the cell (more eccentric in myelocytes and metamyelocytes to central in segmented neutrophils). As the cells mature, they lose mitotic capability and and have less protein synthetic machinery (rough endoplasmic retention). Retention of protein synthetic machinery (rough endoplasmic reticulum) in mature neutrophils indicates immaturity and is a feature of “toxic change“, which is cytokine-driven accelerated maturation and release of maturing neutrophils in response to an inflammatory stimulus.

Neutrophil precursors can be divided into the mitotic pool (myeloblast, progranulocyte, myelocyte) and post-mitotic pool (metamyelocyte, band and segmented neutrophils). Transit from the mitotic pool and maturation through the sequential stages takes about 4-6 days in humans (Lahoz-Beneytez et al 2016). In addition, granulocytes are located in the paratrabecular or osteoblastic niche in the bone marrow (closest to bone marrow spicules), a unique microenvironment in which important stromal signals (mechanical and chemical) promote myeloid maturation. This niche is furthest away from the bone marrow sinusoids, however neutrophils have adhesion molecules and can move away from the osteoblastic niche into the sinusoids and then into the peripheral circulation. Neutrophils are retained in bone marrow due to high marrow concentrations of stromal-derived stem cell factor (SDF-1α), which is recognized by the chemokine receptor, CXCR4. The receptor is expressed in low concentrations in mature neutrophils in murine bone marrow and inhibition of this receptor causes a release of neutrophils into the circulation (Furze and Rankin et al 2008). It takes around 6 days for neutrophils to be produced from the earliest precursor (2-3 days in mitotic and post-mitotic pool) in dogs, cats and ruminants (calves).

Neutrophils are released normally under steady state conditions and once they enter the circulation, they can either be central in the vessels (circulating pool) or marginating on the endothelium, where they patrol the endothelium looking for inflammatory signals that will draw them into tissues (they patrol the endothelium via selectin-selectin ligand interactions, which form brief, transiently broken tethers, e.g. L-selectin binds to sialyl-lewis X on endothelial cells). In most species, the marginating to circulating pool is about 1:1, whereas it is 2-3:1 in cats in cats. The marginated pool can be reduced (and become the circulating pool) under the influence of epinephrine or norepinephrine (resulting in a physiologic leukocytosis with an increased number of mature neutrophils in the circulation) or corticosteroids (endogenous or exogenous), which downregulate selectins and selectin ligands on neutrophils and endothelial cells, respectively, also resulting in an increased mature neutrophil count (“stress” leukogram).

Under inflammatory conditions, neutrophils are released from the bone marrow in response to inflammatory cytokines, such as macrophage inflammatory protein-2, interleukin-8, and chemotactic leukotrienes (e.g. complement C5a), which are released by endothelial cells in response to damage-associated and pathogen-associated molecular patterns (DAMPs and PAMPs). In addition, the granulopoietic cytokine, G-CSF, reduces SDF-1α levels in marrow and decreases expression of the receptor, CXCR4, on mature neutrophils (the SDF-1α-CXCR4 axis serves to retain neutrophils in the marrow compartment), and stimulates selective neutrophil egress from marrow as well as increased production. In order to enter the circulation, neutrophils have to traverse the bone marrow sinusoidal endothelium, a layer of specialized endothelial cells that act as the only barrier between peripheral blood and marrow. This is accomplished by neutrophils transmigrating across the endothelium, which does not adversely affect the endothelium (Furze and Rankin 2008). Endothelial cell injury could potentially result in the non-specific release of neutrophils and may explain leukoerythroblastic responses (leukocytosis with a left shift in neutrophils and increased nucleated red blood cells) in blood in certain disease states (e.g. severe trauma, septicemia, bone marrow neoplasms).

As neutrophils age, they exit the circulation (and actually become more effective antibacterial agents) and undergo programmed cell death (this normally occurs in the bone marrow, liver and spleen but also sites of egress into tissues). Homing of senescent neutrophils to the bone marrow is mediated through the SDF-1α-CXCR4 axis, with higher expression of CXCR4 on older neutrophils (Martin et al 2003). Factors that affect this natural turnover can result in prolonged neutrophil lifespan and persistence in circulation or decreased lifespan and neutropenia (e.g. congenital neutropenias). Lifespan in blood and tissues can be prolonged under inflammation, under the influence of inflammatory cytokines such as IL-1 and IL-17A, and signals from micro-organisms. Studies in mice have also shown that the normal gut microbiotica (particularly Lactobacillus species) can inhibit neutrophil apoptosis, prolonging lifespan, through their peptidoglycans stimulating pro-inflammatory cytokine secretion (IL-17A) from γδ intestinal T lymphocytes (Ergott et al 2016).

Although neutrophils have traditionally been considered to be a homogenous population of cells with similar function and activity, neutrophils in blood and bone marrow (of mice at any rate) are heterogeneous, some consisting of newly developed cells and other of cells that are recycled back to the marrow (for destruction of effete cells or modulation of marrow functions). At least three subsets of neutrophils have been identified, that differ by surface marker and chemokine receptor expression (Ng et al  2019). For example, neutrophils in the marrow and blood are of different ages, with older and younger (more newly produced) cells. Studies with mice show that “aged” neutrophils (as shown by lack of uptake of the proliferation marker, BrdU after pulse exposure and higher CXCR4 expression) express higher levels of the adhesion molecule, Mac-1/CD11b, particularly after stimulation by lipopolysaccharide. “Aged” neutrophils also appear to be more competent at producing NETs. Higher expression of Mac-1 appears to mediate the more rapid recruitment of older neutrophils to sites of inflammation, in a TLR-4-dependent mechanism, meaning that these neutrophils are the first defenders against micro-organisms. They also appear to display higher phagocytic activity, but similar levels of bacterial-killing reactive oxygen species, to younger neutrophils (Ulh et al 2016) and are more efficient at NETosis (Ng et al  2019). In both humans and mice, newly formed neutrophils are released in the morning, i.e. neutrophil release shows a circadian rhythm, which may be mediated by clock genes (e.g. hClock, hPer2) and glucocorticoids. Neutrophils in tissues are also not a homogeneous population, but show different characteristics, including immune sentinel behavior, such as marginating more in certain tissues than others (e.g. lungs) so that they can rapidly respond to infectious agents. It is also possible that neutrophils home to specific tissues, just like lymphocytes do, but there is no conclusive data showing homing receptors or chemokines that are tissue specific for neutrophils. We also think of neutrophils as static cells that are released by bone marrow and cannot be modified by extramedullary factors. There is evidence now that this is not hte case, but that the phenotype of neutrophils can change in respond to environmental cues, suggesting that they are a malleable cell, that can adapt to localized changes, despite their short lifespan. We have also always thought of neutrophils and acquired immunity independently, but there is accumulating evidence that neutrophils modulate the behavior of other immune cells. For instance, neutrophils in the splenic marginal zone can assist B cell immunoglobulin production locally in the spleen, G-CSF stimulates production of neutrophils that support T cell immunity, and subsets of neutrophils are immunosuppressive. These changes in neutrophils may be mediated by epigenetic alterations (Ng et al 2019).