Lots of terms are thrown around hematologic testing (and clinical pathology in general) and some terms mean different things, depending on the context in which they are applied. A classic example is the term myeloid, which means all non-lymphoid cells (granulocytes, monocytes, erythroid cells, megakaryocytes) in the context of acute leukemia, whereas it means all granulocytes and monocytes when referring to a myeloid to erythroid ratio in marrow. Confusing! 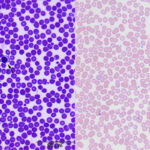