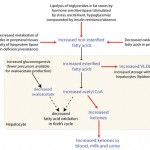 β-hydroxybutyrate along with acetone and acetoacetate, is considered a ketone. Ketones are produced from the metabolism of non-esterified fatty acids (NEFAs) and volatile fatty acids. In monogastric animals (dogs, cats), the main source of ketones is NEFAs, which are released from fat stores in the body during states of negative energy balance where fat, and noncarbohydrates (glucose) become the energy source. In ruminants, both NEFAs and volatile fatty acids produced from rumen metabolism can be used to form ketones. Propionate, butyrate and acetate are volatile fatty acids that are produced by rumen fermentation. Of these, mainly butyrate is converted to BHB in the rumen epithelium and the liver. Camelids, despite having a rumen-like forestomach, do not produce much BHB from the gastrointestinal tract.

The primary ketone produced by the liver from NEFAs is acetoacetate. This is reduced to BHB within the mitochondria and spontaneously decarboxylates to acetone. The ketones are excreted into the circulation, taken up by other tissues (e.g. skeletal muscle, mammary gland), where they are oxidized to yield energy or, in the case of the mammary gland, incorporated into milk fat. An increase in ketones in the blood is called ketosis. Since ketones are acids, increased concentrations can result in a primary metabolic acidosis when values are high enough to overcome normal body buffers (primarily bicarbonate, concentrations of which decrease in blood). This is called ketoacidosis but it is not always present in states of ketosis. Ketones are freely filtered by the glomerulus and, since renal absorptive thresholds are low, they are readily found in the urine during ketosis.

A variety of assays are currently available for measuring BHB levels in bodily fluids: spectrophotometric quantitative assays, nitroprusside method (e.g. Ketostix, Acetest), other quantitative or semiquantitative methods (e.g. Ketolac BHB strip). Spectrophotometric assays based on the catalytic activity of BHB dehydrogenase are generally used to quantify BHB concentration, e.g. Randox assay, and is the method used at the Clinical Pathology Laboratory of the Animal Healthy Diagnostic Center at Cornell University.

The reaction is shown below:

The concentration of BHB is measured in mg/dL (conventional units) or mmol/L (SI units). The conversion formula is shown below:

BHB values are stable for 72 hours at 4°C or 24°C in separated serum, EDTA plasma or heparin plasma from bovine blood. BHB values are stable in all three samples kept as whole blood for 24 hours in dairy cattle. Bovine BHB is also stable frozen for 1 month at -70°C (Stokol and Nydam 2005)

Low values are not clinically relevant.

Measurement of BHB values may be useful in evaluating rumen development in weaned calves. With weaning and the shift from liquid to solid feed, the rumen epithelium changes to facilitate increased absorption of  volatile fatty acids, the main source of energy for cattle and product of rumen fermentation by anaerobic bacteria. A study of 20 calves over weaning showed that BHB concentrations of 100 μmol/L (1.0 mg/dL) support adequate rumen maturation and feed intake from starter feed for weaning, when samples are collected 2 hours after eating the ration (Deelen et al 2016). However, these studies have just started and more data is needed to determine how useful BHB truly is for this purpose.

Increased BHB concentrations in blood indicates stimulation of lipolysis (all species) or excess absorption of butyrate (ruminants) from feeding spoiled silage (also called alimentary ketosis). Lipolysis is stimulated by any condition leading to negative energy balance (starvation/anorexia, late pregnancy or lactation, insulin lack/inhibition) and exercise (dogs, horses). In late pregnancy, negative energy balance may be compounded by a state of insulin resistance (due to progesterone). This promotes ketogenesis by causing a shift in energy metabolism from glucose to fat, decreasing conversion of dietary or endogenous triglycerides to stored fat, and by decreasing fatty acid oxidation in hepatocyte mitochondria (thus more acetyl CoA is available to form ketones (see image above). Note that horses have poorly developed ketogenic pathways, so ketosis is rare in this species.