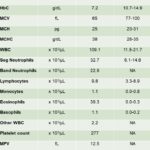 The pronounced leukocytosis was primarily due to a marked eosinophilia (Question 1), consisting predominantly of metamyelocytes (65%), with fewer myelocytes (26%), and band (6%) or segmented (1%) cells (Figures 1-4, Table 1). The eosinophils had moderate to deep blue cytoplasm and some mature cells were hypogranulated. These changes were interpreted as dysplasia. A few eosinophils were also apoptotic (pyknotic nuclei and shrunken cytoplasm, not shown). Low numbers of blasts (presumptive myeloblasts) were identified (2% of the differential count). These were large mononuclear cells with fine chromatin, variably distinct nucleoli, and a small amount of medium blue cytoplasm (Figure 4). There was a concurrent moderate neutrophilic leukocytosis with a severe left shift extending to myelocytes. Neutrophils contained a few Döhle bodies (mild toxic change or dysplasia) and some were also dysplastic (larger cells than normal, elongated or hypersegmented nuclei; not shown). The dominance of immature eosinophils supported a diagnosis of (chronic) eosinophilic leukemia. A hypereosinophilic syndrome (HES) was considered unlikely because the latter should consist of mature eosinophils with a minimal left shift (Question 2).

The moderate anemia in the Hedgehog appeared regenerative based on numerous polychromatophils in the blood smear (Figures 1-4, reticulocyte counts were not done). The anemia was presumed hemolytic because there was no evidence of blood loss, although the latter could not be completely ruled out. The mechanism of the hemolytic anemia was unclear but it was likely due to fragmentation, since there were moderate acanthocytes (Figures 1-4) and a few schistocytes and keratocytes in the blood smear (Figure 1). Acanthocytes could also be explained by lipid membrane changes from liver injury and cholestasis, based on the increased ALT and ALP activities and hyperbilirubinemia (suspect increases in both indirect/unconjugated and direct/ conjugated bilirubin) on the chemistry panel. A hemolytic anemia could also contribute to the high total bilirubin concentration (via increasing unconjugated bilirubin). An explanation for the microcytic and hyperchromic RBC indices on the CBC was not apparent, but these changes were possibly due to a short sample (artifact from excess EDTA) because the patient lacked electrolyte abnormalities, specifically hyponatremia, that could also explain these results. Platelets were judged low on blood smear examination and a few platelets had abnormally large granules or were hypogranular (dysplasia, presumptive). The discrepancy between the automated platelet count (within RI of most species) and the platelet estimate from the blood smear (markedly decreased, Table 1) was attributed to the analyzer counting cytoplasmic fragments containing eosinophilic granules as platelets (Figure 2). 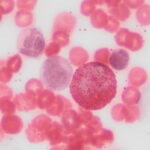 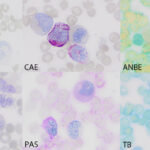 Cytochemical staining was pursued on unstained blood smears from the Hedgehog and another Hedgehog with normal hemogram results to ascertain whether the leukocytes in the Hedgehog with eosinophilic leukemia showed normal staining reactions (Question 3). Unfortunately, we only had smears from one Hedgehog to ascertain “normal” staining reactions – ideally it would have been optimal to stain more than one Hedgehog with a normal hemogram, as well as Hedgehogs with inflammatory leukograms, however smears from these animals were not available. The following cytochemical stains were performed: Myeloperoxidase (MPO), chloroacetate esterase (CAE), alkaline phosphatase (ALP), α-naphthyl butyrate esterase (ANBE), sudan black B (SBB), Luna, toluidine blue (TB), and periodic acid-schiff (PAS). The eosinophils and neutrophils showed similar staining reactions in both animals with some exceptions (Table 2, Figures 5 and 6). Staining for CAE and PAS in the neutrophils of the Hedgehog with leukemia was stage dependent with weaker staining in mature versus immature neutrophils with CAE and stronger staining in mature versus immature neutrophils with PAS. Monocytes in both animals were diffusely positive for ANBE in the cytoplasm and most lymphocytes in the control Hedgehog with fewer lymphocytes in the Hedgehog with leukemia showed focal to multifocal cytoplasmic staining for ANBE. Basophils were strongly positive for TB in both animals and rare large lymphocytes showed weak positive reactions for TB in both animals. The presumptive myeloblasts (when identified due to low numbers) were negative for all stains in the hedgehog with eosinophilic leukemia.

Table 2: Summary of cytochemical staining reactions in blood smears from a Hedgehog with eosinophilic leukemia and a control Hedgehog with a normal hemogram. Red lettering indicates differences in staining patterns comparing the same lineage between the two animals.

In human medicine, eosinophilia (defined as > 0.5 x 103/µL eosinophils) has been split into three categories: Reactive, clonal, and idiopathic.3 Reactive eosinophilia occurs in response to an underlying cause, such as infectious agents and allergic or neoplastic conditions, e.g. Hodgkin’s lymphoma, T cell lymphoma, and rarely acute lymphoblastic leukemia (ALL).3 Clonal eosinophilia can be seen with several myeloid neoplasms, including chronic eosinophilic leukemia (CEL), chronic myeloid leukemia (CML), chronic myelomonocytic leukemia (CMMoL), and myelodysplastic syndrome (MDS), to name a few.3,4  Idiopathic eosinophilia or HES is a diagnosis of exclusion after ruling out the other two categories by extensive testing, such as allergy and parasitism screening, computed tomography for underlying neoplasia, bone marrow aspiration or biopsy, genetic analysis, and immunophenotyping of peripheral lymphocytes.3 These 3 categories have also been used to describe and distinguish persistent eosinophilia in animals.5-7 As in humans  (Table 3), it is difficult to distinguish between eosinophilic leukemia and HES in animals.3,5-7 The most common factor used for differentiation of these two diseases is the degree of eosinophilic immaturity within blood and bone marrow.3,5-8 In eosinophilic leukemia, a larger percentage of the eosinophils are immature, shifted as far back as myeloblasts, with some showing dysplastic features. In contrast, in HES, eosinophils are mostly mature forms with normal morphologic features.3,5-8

On average, African hedgehogs live between 4-6 years and appear to be little tumor factories, frequently developing various neoplasms between 2-3 years old, although animals as young as 1 month old can be affected.8-11 Tumors include hematopoietic neoplasms, such as lymphoma, acute leukemia (T cell and lineage undetermined) and eosinophilic leukemia, mast cell tumors and various epithelial tumors affecting the gastrointestinal system, mammary gland and oral cavity.6-11 Some hedgehogs can have more than one type of tumor with multi-organ involvement.6,8-11 Reported clinical signs of eosinophilic leukemia in the reported cases in hedgehogs are not specific and include decreased food and water intake, weight loss, decreased activity, and progressive hind limb ataxia.6-8 The cause of the latter has not been ascertained but it could be due to neural infiltrates of eosinophils or other neoplasms. Organomegaly, including lymphadenopathy, is noted in affected animals.6-8 As done with this case, eosinophilic leukemia in hedgehogs has been distinguished from idiopathic HES based on the degree of eosinophil immaturity in smears of blood and bone marrow aspirates.6-8 Compared to 2 other reported cases,6-7 eosinophils in this case were readily identified in Wright’s-stained blood smears by their characteristic granules.5,6 In our case, the eosinophil granules were strongly positive with Luna stain, however the putative agranular blasts were negative, as found by others.7

Hedgehogs with eosinophilic leukemia usually have a mild to moderate anemia or low normal hematocrit.6-8 The anemia can be regenerative in some animals.6,8 The mechanism of anemia is likely multifactorial and case-dependent. In the case herein, we speculated that the regenerative anemia was hemolytic in nature. Affected animals generally have very high leukocyte counts (>30 x 103/μL) dominated by eosinophils but most animals also have a neutrophilia with variable degrees of neutrophil immaturity, although mature neutrophils dominate in blood.8 The neutrophilic leukocytosis could be part of the neoplasm (suspected due to the dysplasia in this lineage) or an inflammatory drive. Thrombocytopenia was seen in all 3 cases in one report (which included the case herein)8 and could be due to decreased marrow production, although other mechanisms could be operative (e.g. consumption, activation). Consumption was suspected in this case due to the evidence of erythrocyte fragmentation and liver injury on the biochemical panel. The lymphocytosis and basophilia in this case could be serendipity, i.e. secondary to the high leukocyte count and chance of encountering these cells in a differential cell count. Other mechanisms, e.g. antigenic stimulation for the lymphocytosis or cytokine-driven production of basophils, are possible.

In this case, the increased creatinine concentration with high normal urea nitrogen concentration could reflect a prerenal azotemia (the animal may have been dehydrated due to lack of water or food intake, despite no clinical description of dehydration) or a renal azotemia. The latter was considered more likely based on the higher creatinine than urea nitrogen concentrations, although urea and creatinine handling in this species is unknown). A renal azotemia could be due to tumor infiltrates, hypoxia or thrombosis, if the patient was hypercoagulable. The increased ALT activity (with normal creatine kinase activity) indicated liver injury and the high ALP activity and total bilirubin concentration supported cholestasis. The latter may be due to tumor infiltrates, hypoxic injury, or downregulation of bilirubin transporters in the canaliculi (functional cholestasis) from hypoxia or pro-inflammatory cytokines. As indicated above, a hemolytic component to the hyperbilirubinemia is possible. In two other reported cases of eosinophilic leukemia in Hedgehogs,8 both animals had evidence of antigenic stimulation or inflammation (low albumin and high globulin concentrations), liver injury (increased ALT activities) and likely cholestasis (increased ALP activities in both, moderate increase in total bilirubin concentration in one animal). One animal also had a high urea nitrogen concentration (creatinine was not measured).

Due to the dysplasia evident in eosinophils and neutrophils, we used cytochemical staining to clarify the lineages of some cells and in an attempt to identify the lineage of the putative blasts. Eosinophils stained similarly to the control hedgehog and largely mimicked reported staining patterns for other species,12 with a few exceptions. The mature eosinophils in the control Hedgehog but not those in the leukemic Hedgehog were weakly positive for CAE, which is not a typical stain of eosinophils in other species and may represent a Hedgehog-specific feature. This theory would require confirmation by staining the blood of other Hedgehogs. The immature eosinophils showed weak ANBE and TB reactivity in the leukemic Hedgehog, which could be aberrant staining due to neoplasia or a feature of eosinophil immaturity. Immature eosinophils were lacking in the control Hedgehog blood, thus bone marrow aspiration of a normal Hedgehog would be required to be more conclusive as to these staining reactions (however bone marrow aspiration is not really feasible for this purpose). It is also possible that the positive TB reaction in the immature eosinophils was due to increased cytoplasmic RNA,13 which is supported by the bluer cytoplasm in many of these cells. Increased cytoplasmic RNA may also explain the positive TB reaction in presumptive large reactive lymphocytes in both Hedgehogs. Unlike the control Hedgehog, mature neutrophils in the Hedgehog with leukemia were negative for MPO and SBB and also, unexpectedly, weakly positive for TB.  The negative MPO and SBB staining in neutrophils could be due to degradation with storage (cytochemical staining was done on smears stored for 4 years) or dysplasia. Neutrophils did demonstrate some features of toxicity, indicating immaturity, which may also explain the positive TB reaction. However, it remains to be determined if immature or toxic neutrophils in Hedgehogs without leukemia demonstrate TB reactivity. The low numbers of ANBE-positive lymphocytes in the Hedgehog with leukemia versus the control Hedgehog could also represent aberrant staining with cancer or alterations in lymphocyte subsets as a consequence of the leukemia. Lymphocytes that express ANBE are usually of T cell origin,12 however B cells can also have positive staining reactions in B cell neoplasms (Stokol, personal observations). Unfortunately, the blasts were negative for all cytochemical stains and their lineage could not be confirmed.

Aspirates of the bone marrow or other organs was not performed and the animal was discharged to the owner and lost to follow-up.