The direct preparations from material aspirated from the tortoise’s left tarsal joint are highly cellular, consisting primarily of inflammatory cells with large numbers of urate crystals admixed. The inflammatory cells are chiefly a mixture of heterophils and macrophages (Figures 1 and 2). The heterophils often contain coalescing granules and copious extracellular granules are also seen throughout the sample. Occasional multinucleated giant cells (fused macrophages, Figure 2) are noted, along with low numbers of thin, spindle cells interpreted as fibroblasts, small lymphocytes and rare eosinophils (not all of the inflammatory cells seen are pictured). The increase in macrophages and the presence of multinucleated giant cells indicates chronicity. Key to interpretation of the case is the presence of large numbers of extracellular, light amber, thin, needle-like, refractile crystals (Figures 1, 3 and 4). These crystals can also be seen in thick sheaves where the density of the crystals piled on top of each other produces a more brown-yellow color (Figure 1). The crystal morphology is indicative of urate, which are diagnostic for articular gout.

Gout is defined by the deposition of urate crystals in soft tissue structures or joints, with the latter being termed articular gout. The disease is recognized in primates, birds and reptiles. The deposition of urate crystals is highly inflammatory. In humans, once the crystals form in the joint space, macrophages and synoviocytes phagocytize the crystals and release inflammatory cytokines, including interleukin-1 and prostaglandins.1 Neutrophils are then recruited to the site and release leukotrienes and additional prostaglandins, adding to the intensity of the inflammatory response.1 Over time, the urate crystals invoke a Th2 response, leading to fibrosis and activation of osteoclasts, which erodes bone.1 Presumably similar mechanisms would be at work in reptiles. Visceral gout may accompany articular gout in reptiles, but is not often discovered until necropsy.

The exact pathogenesis of gout is unknown. Uric acid is a product of protein breakdown (via xanthine oxidase or hydrolytic enzymes).2 In reptiles, the uric acid is taken one step further and converted into urate.2 In general, excess dietary protein (e.g. feeding dog or cat food to herbivorous reptiles), decreased excretion of urates due to renal disease and dehydration are linked to gout.1-3 In the case of this tortoise, the owner was feeding greens, occasional fruits and turtle pellets, but had only owned the animal for a short time and the previous dietary history was unknown. Blood work was initially declined by the owner and on subsequent rechecks it was difficult to obtain a suitable sample volume for clinical chemistry analysis. The tortoise’s clinically dehydrated state could have been augmented underlying renal disease and contributing to urate crystal deposition in this case. 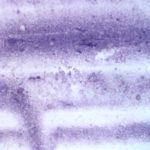 Clinically, gout must be differentiated from pseudogout, which can present in a similar fashion with grossly swollen and painful joints. Pseudogout occurs due to the deposition of calcium pyrophosphate crystals in periarticular cartilage, eventually extending into the joint, where inflammation is then triggered.4,5 In humans, pseudogout may be idiopathic or occur due to hereditary abnormalities or secondary to calcium metabolism disorders.4 In reptiles, the condition has been linked to excess dietary calcium and vitamin D.5 Aspiration of joint contents and microscopic examination is adequate for the diagnosis of gout and differentiation from pseudogout (Figure 5).

The joint contents cultured Kocuria spp., a Gram positive cocci. This finding was of unknown significance and may have been a sample contaminant as this organism has been cultured from the conjunctiva of a lethargic, but otherwise normal, spur-thighed tortoise.6 However, antibiotics and husbandry changes (e.g. misting of greens before feeding to increase water intake) were prescribed. This was followed by tube feeding and administration of subcutaneous fluids on subsequent recheck examinations. Unfortunately, the tortoise continued to decline clinically and ultimately was euthanized. At necropsy, a diagnosis of visceral gout was suspected and further confirmed via microscopic examination of mineral-like material adherent to the heart. Histological examination of the kidney and conjunctival lacrimal glands also revealed extensive squamous metaplasia and hyperkeratosis of renal tubules and glandular epithelium, consistent with hypovitaminosis A. The changes in the kidney may have led to tubular obstruction, promoting hyperuricemia and gout in this individual.7 Hypovitaminosis A in turtles can be associated with an all meat or iceberg lettuce diet.