Question 1: The bone marrow sample was highly cellular with moderate to marked hemodilution on an eosinophilic background with a few cytoplasmic fragments.  On low power, immature and mature megakaryocytes dominated with >20% blasts. Many of the megakaryocytes were markedly dysplastic. They displayed significant nuclear to cytoplasmic asynchrony and separate nuclei (Figures 1 and 3). There were numerous other large round cells, most of which were mononuclear (blasts), but there were frequent binucleated and fewer trinucleated and multinucleated cells (Figures 1 and 2). The nuclei of these cells were round to oval with finely stippled chromatin and some had prominent nucleoli. Occasional mitotic figures were seen (Figure 1), some of which were quite bizarre. Most of the cells had smooth margins but rare cells had ruffling or blebbing of their cytoplasmic borders (Figure 4). Their cytoplasm was deeply basophilic although rarely some appeared to be becoming more eosinophilic with coloration and texture reminiscent of platelets. Some of the cells contained a few small punctate cytoplasmic vacuoles. A few of these cells also contained erythrocytes or rarely neutrophils (emperipolesis versus phagocytosis) in their cytoplasm (Figure 2). There were also mildly increased small lymphocytes and plasma cells and occasional macrophages, including erythrophages and hemosiderophages. A few scattered, occasionally hypersegmented, neutrophils were noted but no other myeloid nor erythroid precursors, including polychromatophilic erythrocytes, were seen. Marrow iron was judged to be within normal limits.

Due to the megakaryocytic dysplasia and differentiation of blasts into presumed (albeit dysplastic) megakaryocytes, an acute megakaryoblastic leukemia (AML-not otherwise specified, M7) was suspected. An atypical plasma cell or histiocytic tumor could not be completely excluded but seemed much less likely given the apparent megakaryocytic differentiation (Question 1). There was also a concurrent severe erythroid and myeloid hypoplasia, thereby explaining the peripheral neutropenia and anemia. The mild lymphocytosis, plasmacytosis and histiocytosis were likely reactive changes. The neutrophils also appeared mildly dysplastic. Phenotyping with flow cytometry and cytochemistry was recommended for further elucidation; electron microscopy could also have been considered (Question 2).

In regards to the biochemical abnormalities (Question 3), hypocholesterolemia has been documented with certain neoplastic diseases, including acute myeloid leukemias and histiocytic sarcoma in particular. The mechanism is believed to be due to increased uptake or use of cholesterol by the tumor cells, likely secondary to increased inflammatory cytokines. The hypoalbuminemia is likely multifactorial. It too could be partly due to increased inflammatory cytokines with albumin acting as a negative acute phase protein. Give the profound thrombocytopenia, there is also a possibility that some of the decrease in albumin could be secondary to hemorrhage, potentially through the gastrointestinal tract. 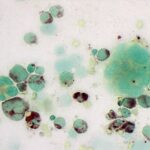 Flow cytometric staining of the bone marrow cells revealed the neoplastic cells expressed CD45 (likely aberrant expression), CD61 (a platelet marker) and MHCII. The blasts were negative for CD34 (stem cell marker), T and B and other myeloid markers (e.g. CD11b, CD11c). Upon cytochemical staining, the cells were strongly positive for alpha naphthyl butyrate esterase (ANBE, positive in promonocytes and monocytes and megakaryocytes in dogs) (Figure 5) with approximately 2% of the blasts and some of the identifiable megakaryocytes also being positive with CAE (normally stains neutrophils and basophils in dogs, whereas megakaryocytes are negative, indicating aberrant staining). The neoplastic cells were negative for alkaline phosphatase (stains monoblasts and presumptive myeloid “stem” cells) and (myeloperoxidase; stains neutrophils and eosinophils in dogs, although monocytes can have few positive granules).  These findings were most consistent with an acute megakaryoblastic leukemia. The owners scheduled an oncology consultation but never arrived for the appointment and the patient was subsequently lost to follow up.

Acute megakaryoblastic leukemia (AMKL) is a very rare form of acute myeloid leukemia that was first described in humans in 1931 and in the dog in 1972.1 It was classified via the French-American-British classification as acute myeloid leukemia (AML) M7 and later defined by the World Heath Organization. It is diagnosed when there are greater than 20% blasts with greater than 50% of the blasts showing megakaryocytic differentiation or positive expression of platelet specific antigens in the bone marrow. In humans, there are 3 different forms – two occurring in children and one in adults.2 In children, the disease is categorized based on whether the affected child has Down syndrome or not. Interestingly those affected with Down syndrome have a much better prognosis with overall survival times of greater than 80%. Children without Down syndrome have a much worse prognosis (overall survival < 10%) although this has improved in recent years. In adults, the disease has a very poor prognosis because even though patients undergo complete remission at the same rate as other types of AML, their overall survival is markedly diminished.2 There have been too few cases in veterinary medicine to draw any conclusions regarding age as affected dogs have ranged from 8 months to 10 years in age with no clear sex predisposition; however German shepherds do appear overrepresented.1,3-10 The prognosis however seems to be consistently poor in affected veterinary patients.

Affected patients (both human and veterinary) present with nonspecific signs such as lethargy, weight loss, exercise intolerance and decreased appetite. Physical examination often reveals signs consistent with anemia, such as pale mucous membranes and tachycardia, as well as variable degrees of hepatosplenomegaly and lymphadenopathy. Some human patients have a prior history of an alternate hematopoietic disorder such as myeloproliferative disease2 whereas other patients, particularly dogs, seem to develop the disease de novo. Documented clinicopathologic abnormalities include nonregenerative anemia, thrombocytopenia or thrombocytosis (less common) and predominantly leukopenia.3-10 In some patients, platelet counts are normal. Circulating neoplastic cells are seen at various concentrations in the peripheral blood. Nonspecific findings such as mildly increased transaminases are often seen on chemistry profiles. Imaging often confirms organomegaly and lymphadenopathy. Rarely humans will also have a primary mediastinal germ cell tumor. Extramedullary involvement is common in both species although in humans it typically affects adults more than children and is associated with a worse prognosis.2

The diagnosis in humans (or veterinary patients for that matter) cannot be based on cellular morphology alone. If there is differentiation of the neoplastic cells into megakaryocytes, as seen in this case, AMKL can be suspected (particularly in combination with cytoplasmic blebbing, binucleated and multinucleated cells). However, some forms of AMKL display no differentiation and the neoplastic cells cannot be distinguished from lymphoblasts or myeloblasts. Morphologic findings suggestive of AMKL are the finding of intermediate round cells, fine chromatin, variably distinct nucleoli, basophilic cytoplasm that occasionally transitions into a more granular eosinophilic cytoplasm (similar to that of platelets), vacuolation, cytoplasmic blebbing and multinucleation. In more differentiated neoplasms, one may also see dysplastic megakaryocytes (including dwarf megakaryocytes and atypical nuclei) as well as abnormal platelets including variably sizes, variably granulation and abnormal shapes.4-6,8 Erythrophagocytosis by the neoplastic cells, as seen in this case, has also been reported in both dogs and humans.7

Definitive diagnosis requires additional diagnostic tests such as cytochemistry, immunocytochemistry (ICC) or immunohistochemistry (IHC), or flow cytometry. Cytochemical markers typically utilized are: Sudan B black and myeloperoxidase (usually both negative); periodic-acid Schiff and acid phosphatase (positive) and non-specific esterase (punctate positive).7 However, cytochemical results in the literature have been variable with even a myeloperoxidase-positive case reported in the dog. However, the latter case likely reflected concurrent granulocytic/monocytic differentiation.5  On IHC, ICC or flow cytometry a multitude of markers are used to not only prove megakaryocytic lineage but also to exclude myeloid and lymphoid neoplasms e.g. CD3 to rule out T cell, CD20 to rule out B cell.11 Most megakaryoblastic leukemias stain positive for the platelet glycoproteins including CD41, CD61 and less frequently CD42, factor XIII and von Willebrand factor. Many cases are weak positive or negative for CD45 (expressed on all leukocytes). Additionally these tumors are often CD34 negative although rare cases are positive.10 One case report in a dog also documented positivity with a CD9 antibody which preferentially labels platelets.1

Myelofibrosis is typically seen in association with AMKL in humans and has been a variable finding in veterinary medicine. In human patients, dry taps are not uncommon and the diagnosis of AMKL occasionally has to be made using tissue imprints.2 Myelofibrosis has also been reported in dogs with AKML and, in some of the veterinary reports of this tumor, although they did not describe myelofibrosis, they did have dry taps7 making one wonder if it is more of a universal feature in dogs too. Applications of special stains such as reticulin and trichrome on core biopsies of marrow are therefore always warranted.

In humans, accurate diagnosis of leukemia relies heavily on cytogenetics – a methodology we are still a way away from utilizing routinely in veterinary medicine. In children with Down syndrome, several genetic factors are involved – obviously affected patients have trisomy 21 but they also have down regulation of GATA1 (the regulator of erythroid and megakaryocyte proliferation) although epigenetics also play a role. Children without Down syndrome have a variety of numerical chromosomal abnormalities such as the t (1; 22) (p13; q13) mutation. A diverse array of cytogenetic abnormalities have been documented in adults with AMKL, often including  mutations more reflective of a previously diagnosed myeloproliferative disorder that has transformed into AKML.2

Chemotherapy usually consists of an anthracycline, such as doxorubicin, combined with cytarabine. However, overall survival rates are disappointing with the exception of in children with Down syndrome in whom complete remissions and long-term survivals are high due to increased chemosensitivity. Allogenic stem cell transplant is also recommended following attainment of complete remission. Future therapies will likely be molecular in origin and target the specific genetic defects identified.2 Drugs that decrease expression of the RUNX1 molecule (critical for normal hematopoiesis) have been shown to increase chemosensitivity. GATA1 regulates Bcl-xL in megakaryocytes – blocking GATA1 again increases chemosensitivity.  Drugs that promote the terminal differentiation of megakaryocytes i.e. inducers of polyploidization have also been advocated, including proteasome inhibitors of AURKA kinase (negative regulator of polyploidization) and tetrandine.2,12 Despite these advances in therapy, the prognosis for acute megakaryoblastic leukemia in humans remains poor with the exception of patients with Down syndrome. The prognosis in our veterinary patients is likely worse given that our treatment options are all the more limited.