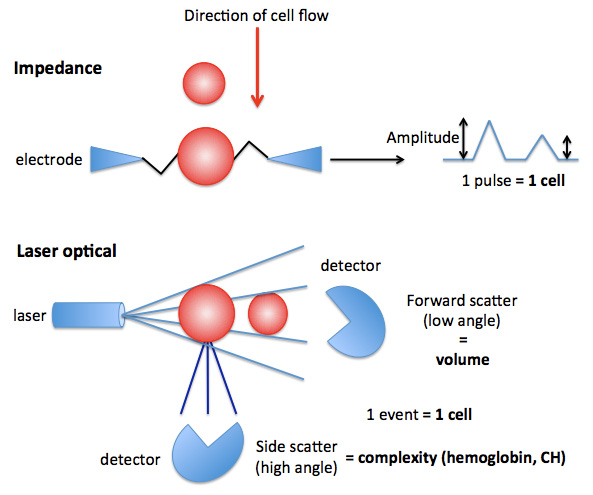 Impedance-based hematologic analyzers allow red blood cells (RBC) to pass through an aperture containing an electrical current. As the RBC move through the current, they add resistance and change the amplitude of the resistance measurement or pulse. Each pulse (change in amplitude) is counted as a RBC, whereas the degree of change in amplitude is a measure of the size (volume) of the RBC with smaller RBC causing less resistance and a lower amplitude.
Laser-based hematologic analyzers allow RBC to pass through in single file through a flow cell containing a laser. As the RBC passes through the laser, it is counted as an event (providing a RBC count) but it also scatters the laser light. Two detectors can measure the scattered light. The first is the forward scatter or low angle light scatter detector, which measures light scattered in a forward direction, which is a reflection of RBC size (more specifically, volume). From the detected laser light, a mean RBC volume (MCV) can be measured and a frequency distribution curve of RBC volume constructed. This is similar to how an impedance analyzer measures RBC volume, although the latter uses change in amplitude of an electrical current. The second type of detector is a side scatter or high angle light scatter detector, which measured light scattered sideways by the RBC. The degree of light scatter is dependent on the complexity or hemoglobin content of the individual RBC and is reported as the corpuscular or cellular hemoglobin (CH in pg) and mean corpuscular hemoglobin concentration (CHCM in g/dL). A frequency distribution curve of laser-measured hemoglobin concentration is also generated. A smaller RBC will scatter less light in a forward direction, resulting in a lower volume. A RBC with less hemoglobin will scatter less light in a side direction, resulting in a lower CH and CHCM (e.g. iron deficient RBC). Measurement of side scatter requires that the RBC is intact, i.e. if the RBC are lysed with intravascular hemolysis or artifactual in vitro hemolysis, the hemoglobin within the RBC cannot be measured. This cellular hemoglobin measurement cannot be done with an impedance-based analyzer. The CH is converted to a calculated or cellular hemoglobin, using the following formula:
Calculated or cellular hemoglobin = (CHCM x RBC x MCV) divided by 1000 or (CHCM x HCT) divided by 1000.
This cellular hemoglobin reflects the amount of hemoglobin in intact RBC. On our hemograms, we provide values for calculated hemoglobin, CH and CHCM instead of the more typical hemoglobin (measured directly after lysis of RBC with spectrophotometric measurement of the released hemoglobin at a specific wavelength) and related indices MCH and MCHC (which are calculated from the directly measured hemoglobin) in cases of lipemia. This is because the hemoglobin is falsely increased in proportion to the HCT and RBC count in these settings, resulting in falsely high MCH and MCHC. We may also report these values intermittently in individual animals, if other variables (agglutination, in vivo hemolysis) falsely increases the MCH and MCHC. 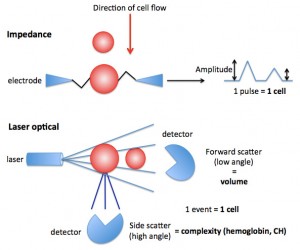