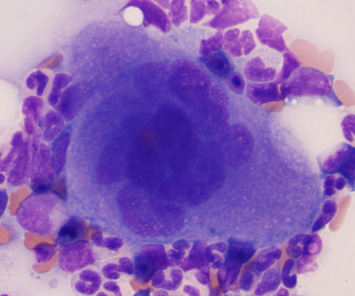 Platelets are produced in the bone marrow from megakaryocytes in the bone marrow. Megakaryocytes are distributed throughout the marrow, but are usually found in the vascular niche. Approximately 1 x 1011 platelets are produced per day in humans and it takes about 12 days for megakaryocytes to be produced and mature to form platelets. Megakaryocyte production with platelet formation is primarily stimulated by the thrombopoietic cytokine, thrombopoietin. Other cytokines, including stem cell factor and IL-3, work with thrombopoietin to promote megakaryocyte maturation, which involves the cell undergoing endomitosis (resulting in polyploidy) and cytoplasmic maturation with granule formation (α- and δ-granules) (Grozovsky et al 2015). Some inflammatory cytokines (IL-6, IL-11, GM-CSF, RANTES or CLL5 [Chen et al 2016]) also stimulate thrombopoiesis, but these cytokines may work through releasing thrombopoietin (although other mechanisms have been proposed for inflammation-induced thrombopoiesis; see below).

Thrombopoietin is produced in the liver (and released constitutively into blood) and by bone marrow stromal cells in the osteoblastic niche in marrow and binds to its ligand on megakaryocytes, the receptor called c-Mpl. Thrombopoietin production is dependent, to some extent, on removal of senescent platelets via desialytion and hepatic destruction (see below). Thrombopoietin binding induces signaling via Janus-activated kinase-2 (JAK2) and the transcription activator, STAT3 (signal transducer and activator of transcription3) and stimulates megakaryopoiesis and platelet production. Thrombopoietin receptor agonists are now being incorporated into the treatment plan for human patients with refractory thrombocytopenia (Cuker and Neunert 2016). Genetic defects with constitutive activation of c-Mpl or JAK2 result in ligand (thrombopoietin)-independent thrombopoiesis and the myeloproliferative disorder of essential thrombocythemia or chronic platelet leukemia (Vardiman et al 2009 review).

Other than thrombopoietin which is needed to drive thrombopoiesis, megakaryocytes also need to resist apoptosis, which is accomplished via the anti-apoptotic proteins, Bcl-XL and Mcl-1. Bcl-XL also inhibits apoptosis in mature platelets. Erythropoiesis and thrombopoiesis share common production factors, including Bcl-XL (which also inhibits apoptosis in erythroid progenitors) and GATA-1, a transcription factor that controls  thrombopoiesis and erythropoiesis. Platelet production occurs primarily in the osteoblastic niche in the marrow (found closest to the bone spicules), which is enriched in stromal cells. From this niche, megakaryocytes must move as they develop to the vascular niche (bone marrow sinusoids), which is facilitated by cytokines (CXCL12 or stromal cell-derived factor) and adhesion molecules (VCAM-1 on endothelial cells and the α4β1 integrin megakaryocytes). Within the vascular niche, megakaryocytes extrude long extensions of their cytoplasm (called “pro-platelets”) into the vascular sinuses, from which platelets fragment (and are thus produced). Elegant studies in vitro have shown that these proplatelets are barbell-shaped and then undergo conformational changes to produce spherical “preplatelets” (also synonymous with young platelets). These spherical “preplatelets” can then revert back to barbell-shaped platelets, which undergo fission to form mature platelets (Thon and Italiano 2012 review). Other studies using in vitro models of three-dimensional gels have shown that stiffness modulates megakaryocyte stiffness, illustrating the importance of biophysical and biochemical factors in platelet production and the role of the microenvironment (Aguilar et al 2016). Neutrophils may also modulate platelet production. Emperipolesis of neutrophils is seen within megakaryocytes in normal bone marrows (estimated in about 6% of megakaryocytes) and neutrophils may “use” megakaryocytes to move into the blood, migrating as intact cells within the dermacation membranes of megakaryocytes. During this passage, which is mediated by adhesive interactions between ICAM-1/LFA-1 and P-selectin/PSGL-1 on megakaryocytes/neutrophils, is thought to be associated with exchange of soluble mediators between the two cells, which modulates platelet production and potentially neutrophil functions (Cunin and Nigrovic 2021).  Neutrophil emperipolesis within megakaryocytes can be increased in inflammatory or reactive conditions, e.g. dogs with Leishmania infection (Manzillo et al 2006) or cats with immune thrombocytopenia (ITP) (Garon et al 1999), with upregulation of P-selectin and potentially ICAM-1 on megakaryocytes, myeloproliferative disorders (e.g. polycythemia vera, idiopathic myelofibrosis) and myelodysplastic syndrome (Cunin and Nigrovic 2021). Platelets actually control their own production to some extent, because after thrombopoietin binds to platelets and megakaryocytes, they internalize the cytokine (after it binds to c-Mpl) and degrade it within their cytoplasm. Thus, the steady state release of thrombopoietin by the liver is controlled by circulating platelets, which degrade the cytokine, preventing it from reaching the bone marrow and stimulating megakaryopoiesis. Other studies have also shown that under inflammatory conditions, cytokines such as IL-1α can increase platelet counts via stimulating “shattering” of megakaryocytes in a form of cell death versus fragmentation of proplatelets (Nishimura et al 2015). Thrombopoietin is not needed for proplatelet formation.

Identification of young platelets can be used as a surrogate to evaluate the bone marrow’s response to a peripheral thrombocytopenia. This is generally accomplished by measurement of RNA content of platelets, or quantification of so-called “reticulated” platelets, with flow cytometric-based DNA-binding dye methods. This is analogous to the detection of reticulocytes (immature red blood cells) for assessment of a regenerative response to an anemia.  In general, younger platelets are also thought to be larger than more mature platelets, but this is clearly not always the case and the absence of large platelets does not mean that the smaller platelets are mature or that a the bone marrow is not responding to a thrombocytopenia (Handtke and Thiele 2020 review). Most studies doe show that larger platelets have increased functionality (by virtue of their size, they express more adhesive glycoproteins, contain more RNA and are more aggregable or procoagulant versus small platelets) (Handtke and Thiele 2020). There are functional differences in just released platelets and mature platelets. A study in mice shows that younger platelets similarly express vital receptors, such as the collagen receptor, GPIIb/IIIa, the vWf receptor, GP1b and the collagen receptor, GPVI, as older platelets. However, the younger platelets do not respond to collagen-induced signals, such as platelet aggregation, which was shown to be due to decreased downstream phosphorylation of signaling proteins. The authors hypothesized this defective signaling to be a regulatory response to prevent the platelets from being activated as they traverse through collagen en route to the circulation (Gupta et al 2018).

The normal lifespan of platelets in dogs (and presumably other species) is around 5-7 days (Tanaka et al 2002). During their normal lifespan in circulation, platelets are altered, with these changes prompting removal by the liver and macrophages (principally in the spleen). The factors causing normal senescence of platelets are partly understood and include removal of sialic acid residues on platelet membranes (desialylation) and apoptosis (membrane flipping with expression of phosphatidylserine on the outer membrane). This removal of desialylated platelets by the liver (predominantly by Kupffer cells) is thought to be one of the triggers for thrombopoietin production (LeVine and Brooks 2019 review). Under pathologic situations, desialylation and apoptosis can be enhanced. For instance, in immune thrombocytopenia, autoantibodies against platelet antigens can induce clearance of platelets by macrophages in the liver bearing Fc or complement receptors, which recognize antibody or complement bound to platelets (analogous to removal of red blood cells in immune-mediated hemolytic anemia). Some antibodies, e.g. those targeting the platelet receptor glycoprotein 1b, can induce platelet desialylation and removal of platelets through hepatocyte galactose receptors (Li et al 2015). Virus infection can cause apoptosis and removal of platelets, leading to thrombocytopenia in the host (Hottz et al 2013).

Platelets naturally have an essential role in hemostasis, but new evidence have revealed roles for platelets far beyond hemostasis, including their contributions to innate immunity and vascular integrity.

Although platelets lack nuclei, they still pack a punch, containing numerous organelles with stored bioactive factors and they are capable of synthesizing procoagulant, inflammatory and cytoprotective mediators on stimulation.

Platelets contain up to 3 types of secretory granules: