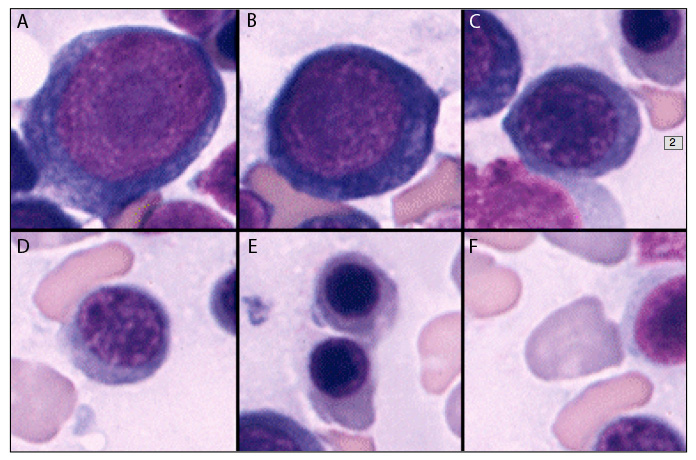 A: The earliest recognizable erythroid progenitor is the proerythroblast, which is recognized by a round nucleus, fine chromatin and deep blue cytoplasm (lots of RNA). This particular cell has an indistinct nucleolus and would be called a rubriblast in veterinary terms.
B: Another version of a proerythroblast. This one lacks a nucleolus and is smaller than the previous cell and would be called a prorubricyte in veterinary terms (and is considered one stage less mature than a rubricyte).
C: This is a basophilic erythroblast (or rubricyte in veterinary terms), the stage of development after a proerythroblast. Note the cell is smaller with clumpier chromatin than the earlier progenitors depicted in A and B.
D: Another version of a basophilic erythroblast or rubricyte, but this one appears to be further down the differentiation path as seen by the clumpier nuclear chromatin and hint of purple cytoplasm (hemoglobin production is starting).
E: Both of these cells are polychromatophilic erythroblasts, also called polychromatophilic rubricytes or metarubricytes in veterinary medicine. Notice the cell is now smaller than the basophilic erythroblast and has a pyknotic smooth nucleus that is shrunken.
F: Once the nucleus is extruded, the remaining cell is called a polychromatophilic erythrocyte or a reticulocyte. This is the cell we look for in peripheral blood to evaluate a regenerative response in most species (expect equidae).
Note that as red blood cells mature, they become smaller, the nucleus becomes more condensed, smaller and is finally expelled, the cell loses protein synthetic machinery (RNA, ribosomes, which makes the cytoplasm blue so it starts off deep blue when young and becomes less blue as it matures), and acquires hemoglobin, which offsets the blue of RNA/ribosomes, yielding purple until very little to no RNA/ribosomes are left, leaving a completely red mature red blood cell. 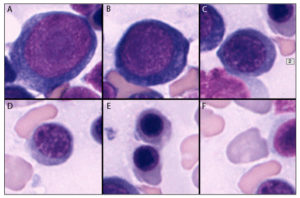