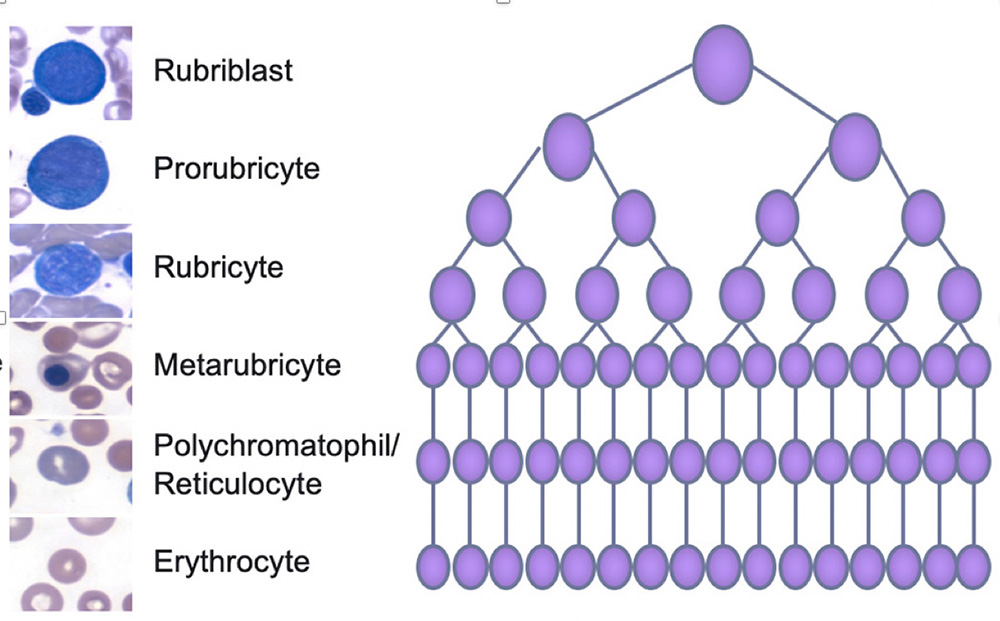 Erythropoiesis in the bone marrow is driven by the cytokine, erythropoietin, which is produced by interstitial fibroblasts in the kidney, in response to hypoxia (and hypoxia-inducible transcription factors, such as HIF-1). As the red blood cells mature from the earliest identifiable cell (by morphology), the rubriblast or pro-erythroblast, it divides, creating new progeny, which are smaller and start to produce hemoglobin. As divisions continue, the cells become smaller and smaller, gain more and more hemoglobin (makes the cytoplasm redder) and lose their protein synthetic machinery (RNA, which makes the cytoplasm blue). They also extrude their nuclei (which is phagocytized by macrophages; the latter cells are thought to stimulate nuclear extrusion by developing erythroid cells). The nucleus can be removed at the fully hemoglobinized stage, yielding either a macrocytic (larger than normal) or normocytic (same size as normal) mature RBC. Alternatively, the nucleus can be extruded at the polychromatophilic stage, yielding a polychromatophil, which are immature RBCs that still contain lots of RNA and are seen as purple in a Wright’s-stained blood smear (blue from RNA + red from hemoglobin = purple or polychromatophilic). These immature anucleated RBC are usually retained in the marrow for around 24 hours (in humans) and then released. After release, they are modified by macrophages in the spleen, which remove membrane and RNA, yielding a macrocytic (macrocyte) or mature RBC, depending on how much of both is removed during each splenic passage. Conversion of immature polychromatophilic RBC to mature RBCs can take up to about 3 days in the dog. Note that in a normal bone marrow, the most mature cells (erythrocytes and polychromatophils) dominate, whereas the most immature cells are infrequent, leading to a “pyramid” or triangle pattern of erythropoiesis. The same triangle pattern is present for granulopoiesis and monocytopoiesis (immature cells are far less frequent than mature fully differentiated cells).
Reticulocytes are immature RBCs that contain RNA in their cytoplasm. We use specific colored dyes (e.g. new methylene blue or oxazine-750) or fluorescent dyes (such as thiazolw orange) to detect the RNA and quantify reticulocytes in blood (typically done in dogs and cats). All polychromatophilic cells are reticulocytes but not all reticulocytes are polychromatophilic (they may or may not be macrocytic or larger than normal when they contain only small amounts of RNA, i.e. insufficient amounts to appear purple with a Wright’s stain). The images on the left show the different stages of maturation of erythroid cells as seen in bone marrow with a modified Wright’s stain. 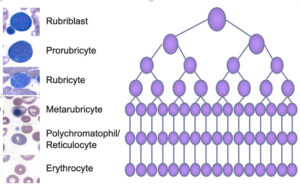