There are several other tests that can be used to assess iron stores. These are not frequently performed because they are invasive (e.g. bone marrow aspirate, hepatic biopsy) or are not routinely offered by diagnostic laboratories, being mostly used in a research setting (reticulocyte indices). 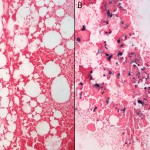 In the absence of hepatic iron, bone marrow aspirates are the least invasive method for assessing nonheme iron stores. Iron within the bone marrow is stored within macrophages and can be subjectively evaluated from aspirates using a Prussian blue stain (which stains hemosiderin blue or black, depending on amounts). However, there are no established guidelines for quantifying marrow iron (it is very subjective), assessment requires a good aspirate containing marrow spicules (where macrophages are usually located) and the technique is usually not required in an established iron deficiency for diagnosis of iron deficiency anemia (hematologic findings are characteristic). However, since iron stores are depleted in marrow before the development of anemia or microcytic hypochromic red blood cells, this is the only technique for detecting early iron deficiency. Unfortunately, aspirates cannot be used in cats to assess iron stores because they usually do not have Prussian-blue stainable iron (in fact observing iron in the bone marrow of a cat is an abnormal finding). The reason for this is unknown, but the reaction does not detect ferritin, which may be the primary storage form of iron in the bone marrow of cats. Hemosiderin is the long-term storage of iron in macrophages and is produced from ferritin that has been partially or completely stripped of its apoferritin shell – it is composed of aggregates of ferric oxyhydroxyl crystals.

With certain laser-based hematology analyzers (e.g. ADVIA), reticulocytes (immature anucleate RBC) can be distinguished from mature RBC by their RNA content.  Their internal hemoglobin content can also be measured by the amount of side scattered (high angle scatter) light, just like hemoglobin can be measured using light scatter in mature RBC. The analyzer provides a lot of reticulocyte indices and we have established reference intervals for these indices in dogs and cats at Cornell University.  We usually do not provide these results with our routine hemograms, but evaluate them internally when we perform hemogram reviews. These indices are used to detect early iron deficiency in human patients, in which only the reticulocytes (just produced RBC) have low hemoglobin but most of the mature RBC (produced previously) have normal hemoglobin. A study in dogs with experimentally dietary induced iron deficiency demonstrated that these reticulocyte indices were more sensitive than conventional mature RBC indices (MCV, MCHC) in detecting early onset iron deficiency (Fry and Kirk 2006).

Of the many reticulocyte indices provided by the analyzer, we have found the most useful to be the CHr and % low CHr, with CHr being the mean hemoglobin concentration in reticulocytes and % low CHr, the percentage of all reticulocytes with low hemoglobin (a preset value).  Generally, dogs with established iron deficiency anemia have CHr below the reference interval (< 22 pg and frequently < 20 pg) and increased % of low CHr (>50%, frequently > 80%). We have also found that dogs with other causes of microcytosis (breed-associated, portosystemic shunt) or low iron and percentage saturation (anemia of inflammatory disease), also have changes in these reticulocyte indices, indicating that changes are not specific for iron deficiency anemia (Schaefer and Stokol 2015). Thus, these tests cannot be used to confirm iron deficiency as a cause of an anemia in dogs.

Hepcidin is an iron-regulatory protein produced in the liver that inhibits iron uptake in the intestine and release from macrophages by downregulating iron transporters (ferroportin) in intestinal epithelial cells or macrophages. Hepcidin secretion is stimulated by iron excess and pro-inflammatory cytokines (particularly interleukin-6) and inhibited by erythroid activity in the bone marrow (erythroferrone). It is thought to be the main mediator of anemia of inflammatory disease and is responsible for rapid decreases in iron concentrations (and % saturation of transferrin) in blood, in acute inflammatory states. It can be measured by liquid chromatography/tandem mass spectrophotometry (Vizi et al 2020), but this is not routinely done in veterinary medicine.