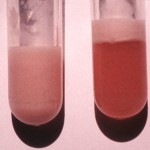 Lipid metabolism involves the interactions of lipoproteins, which enable the transport of lipids (triglycerides) in the circulation and uptake by tissues via specific receptors, and hormones that modify lipoproteins or control fat synthesis or breakdown. There are several different lipoproteins, with the main ones being chylomicrons (CM), very low density lipoproteins (VLDL), low density lipoproteins (LDL) and high density lipoproteins. These vary in their origin, triglyceride and cholesterol content, associated proteins (apolipoprotein) and role. All lipoproteins contain triglycerides and cholesterol in varying proportions. Visible or gross lipemia (typically CM and VLDL) is usually caused by increases in the more triglyceride-rich lipoproteins (CM in particular but also VLDL) and is typically only seen in dogs and cats, with rare cases in horses and camelids (usually due to pathology).  The most common cause of gross lipemia in dogs and cats (see image to the right) is not pathology but more of a collection-associated artifact or pre-analytical variable, which is  collection of blood after eating – also called a post-prandial lipemia. Eating a diet with fat markedly increases CM and, thus, triglyceride concentrations (with minimal to no expected increase in cholesterol). Lipemia interferes with results of hematology and chemistry testing (see test basics, interferences, interference indexes) and should be avoided at all costs. Post-prandial lipemia can be minimized by collecting blood after a 12 hour fast in dogs and cats (see sample collection guidelines for hematology and chemistry), whereas blood sample collection in large animals does not require fasting or consideration of eating (this does depend on the analyte being measured or test that is being performed). Fasting lipemia in dog or a cat or visible lipemia in plasma or serum from large animals indicates an underlying lipid disorder (often called hyperlipemia or hyperlipidemia) and indicates an increase in CM or VLDL or a combination of both, with high triglyceride concentrations. A clue as to which lipoprotein class is increased can sometimes be obtained by looking at the supernatant plasma:

There can still be an increase in triglycerides (and of course cholesterol) in a given animal (small or large) without any visible lipemia.

The following hormones are involved in fat metabolism.