Urine specific gravity (USG) and osmolality are measures of the solute concentration in urine and are used to assess the ability of the renal tubules to concentrate or dilute the glomerular filtrate. 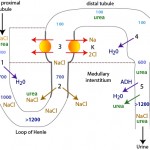 Knowledge of urinary solute concentration is essential for proper interpretation of urea and creatinine, which are indicators of glomerular filtration rate. A wide USG range is possible in healthy euhydrated animals. However animals that are dehydrated, hypovolemic or have decreased effective blood circulating volume should be conserving water (and trying to reconstitute effective blood volume), therefore concentrating their urine. Thus, in the setting of azotemia or an increased urea and/or creatinine, USG is used to determine whether concentrating ability is adequate and is very useful for distinguishing between causes of azotemia.

In order for the kidney to conserve water by concentrating urine, the kidney needs the following:

For more on how the kidney concentrates urine, refer to the renal physiology page.

The interpretation of several urine chemical parameters, such as protein and bilirubin, is also influenced by the specific gravity of the specimen. In addition, urinary constituents (erythrocytes, leukocytes and casts) can lyse in dilute urine (USG < 1.008), affecting interpretation of the urine sediment results.

Urine specific gravity is a measurement of the density of urine compared to pure water. For routine clinical purposes, USG is determined using a refractometer (refractive index generally correlates well with USG). USG is influenced by the number of molecules in urine, as well as their molecular weight and size, therefore it only approximates solute concentration. It is also affected by temperature, with urine density decreasing (lower USG) with increasing temperatures. The presence of large amounts of protein and glucose will alter the USG and should be considered when interpreting USG results.

A concentration of 1 g/dL of the following substances in urine has been reported to increase the USG as follows:

A study in which glucose was spiked into pooled canine and feline urine of different USGs showed the following:

The effect of these substances on USG does depend on the refractometer, some of which are more accurate than others (Tvedten et al 2015). Cornell University uses a temperature-compensated Reichert refractometer currently for USG measurements in animals.

Indicated below are guidelines for interpreting the USG in animals. Note that different cut-offs for “adequate” concentrating ability and isosthenuria are reported in the literature. Given below are the ones used here at Cornell University.

Urine osmolality is directly related to the number of particles in solution and is unaffected by molecular weight and size. For this reason, osmolality is superior to specific gravity, which is affected by particle weight and size. Osmolality can be measured by freezing point depression (the technique used at the Clinical Pathology Laboratory of the Animal Health Diagnostic Center at Cornell University) and changes in vapor pressure. Urine osmolality can also be approximated from the USG. This is calculated by multiplying the last two digits of the USG by 36.

Isosthenuric urine has an osmolality similar to plasma, approximately 300 to 320 mOsm/kg. Urine osmolality is useful for evaluating urine concentrating ability, for example in water deprivation tests, and is more accurate than measurement of urine specific gravity in this regard.