Erythrocytosis is defined as an increase in red blood cell (RBC) mass, usually absolute, and is also associated with an increased hematocrit (HCT) and hemoglobin concentration. Although some use the term polycythemia interchangeably with erythrocytosis, the two are not synonymous. Polycythemia in precise terms refers to an increased number of any hematopoietic cell in blood, be it RBCs, platelets or leukocytes. An increase in RBC number (whether relative to changes in body water or an absolute increase in RBC mass) is more precisely called erythrocythemia, but this term is not in general use and we are currently using the term erythrocytosis instead of polycythemia for an increase in RBCs (relative or absolute). Complicating matters is the term polycythemia vera, which specifically refers to a type of chronic myeloid leukemia that only affects the erythroid lineage or, in other words, a chronic erythroid leukemia. 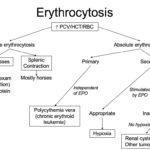 An increased HCT or RBC count can be relative (proportional changes of RBC numbers in relation to plasma water) or absolute (a true increase in RBC numbers due to erythropoiesis, i.e. erythrocytosis). The different causes of an increased HCT or RBC count can be distinguished on the basis of clinical signs and signalment (dehydration, young horse), response to fluid therapy (relative increases should correct with appropriate fluid treatment), total protein concentration (usually only increased with relative increases due to dehydration), detection of hypoxia (arterial blood gas analysis), cardiovascular and pulmonary evaluation, and searching for underlying causes of increased RBC production, which would result in a true increase in RBC mass or erythrocytosis (such as liver and renal disease, including neoplasia). Measurement of erythropoietin concentrations are rarely performed and usually not informative (i.e. not helpful in distinguishing between causes). Bone marrow aspiration is usually not worthwhile as the marrow shows an erythroid hyperplasia in all causes of erythrocytosis.