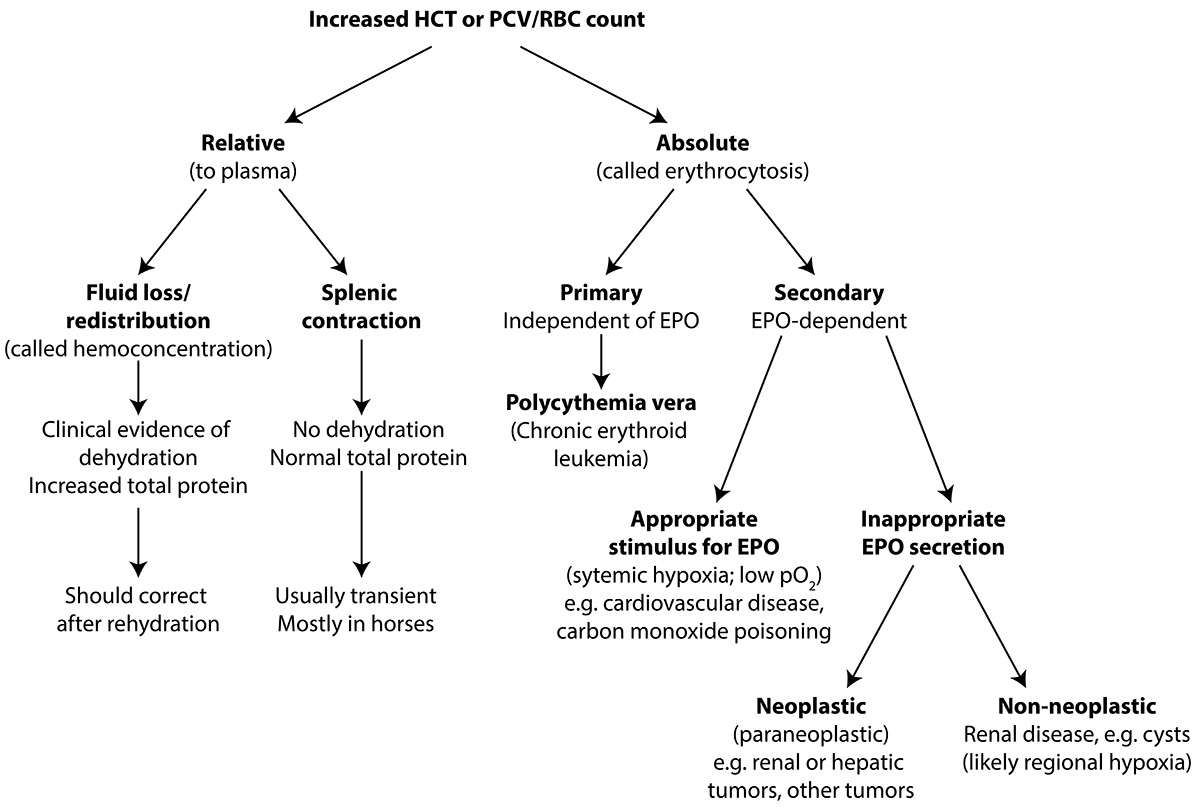 An increase in packed cell volume (PCV) or hematocrit (HCT) or red blood cell (RBC) count can be a relative change in relation to plasma volume or an absolute increase, with the latter being called an erythrocytosis (or more specifically erythrocythemia, although no-one uses the latter term). The term erythrocytosis is often used interchangeably with polycythemia, although this is not 100% accurate. Relative changes are due to loss or redistribution of fluid in relation to RBCs (e.g. increased vascular permeability due to endotoxemia, fluid losses from severe vomiting or small bowel diarrhea), which is usually recognized by clinical evidence of dehydration and an increased total protein (both globulins and albumin). This is also called hemoconcentration. Splenic contraction in response to epinephrine (most common in young or “hot-blooded” horses, such as Thoroughbreds) can also increase RBC numbers versus plasma. Usually the total protein concentration is normal (and there is no clinical evidence of dehydration), unless there is another underlying cause for a change of protein (e.g. low values might be expected in a young animal and underlying antigenic stimulation may increase total protein and globulin concentrations). The term erythrocytosis indicates an absolute or true increase in RBC mass and not just a relative change versus plasma volume. This can be primary (or erythropoietin [EPO]-independent) or secondary (EPO-dependent). A primary erythrocytosis is usually due to a neoplastic bone marrow disorder called polycythemia vera, which is the erythroid variant of a chronic leukemia. In humans, 90% of cases are due to mutations in JAK2, a tyrosine kinase downstream of the EPO receptor, which makes the latter constitutively active and independent of EPO. Familial causes of erythrocytosis have been identified in cattle (mechanism unknown). Secondary erythrocytosis can be due to an appropriate stimulus for EPO release, such as hypoxia or an inappropriate release of EPO from EPO-producing neoplasms (mostly in the kidney but also in the liver or other tumors) or secondary to other renal disorders (e.g. cystic kidneys, which is likely due to regional hypoxia stimulating EPO release). 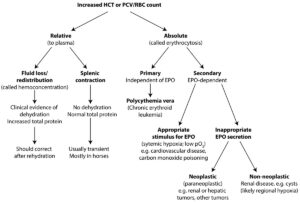