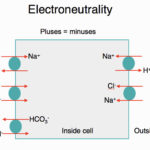 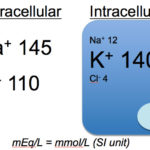 The composition of the ICF and ECF are very different. Solutes are not distributed equally throughout body fluids, due to the vascular endothelium and different permeability of cell membranes for various solutes. Sodium and chloride are much higher in the ECF than potassium, which is higher in the ICF (remember, that in most cells, Na/K transporters pump out and K in). Despite these differences, the total number of all cations and anions in body fluids are equal to maintain electroneutrality.

Osmolality refers to the number of osmotically active particles (osmoles) per kilogram of solvent. In clinical veterinary medicine, osmolality is expressed as milli-osmoles per kg. Osmolarity is simply the concentration per liter of solvent. In biologic fluids, there is a negligible difference between osmolality and osmolarity and the terms are often used interchangeably. Osmolality can be assessed in two ways:

The calculated osmolality is typically about 280-310 mOsm/kg in healthy animals. The osmolal gap is the difference between the measured and calculated serum osmolality:

A solution is termed hypertonic, isotonic, or hypotonic based on higher, equal, or lower concentrations of impermeant solutes compared to normal plasma. For the purposes of this lecture, consider a fluid conceptually as hypotonic, isotonic and hypertonic as follows:

The kidneys are the main organ responsible for regulating total body sodium, and do this by resorbing filtered sodium or excreting sodium. The main stimulus for sodium resorption or excretion are changes in volume (hypovolemia, hypervolemia).

This is defined as decreased effective circulating volume and is usually due to fluid losses from the body. The main sources of fluid losses are the gastrointestinal tract (e.g. vomiting, diarrhea) and kidney (e.g. osmotic diuresis), with the skin, third space “losses” or sequestration and respiratory losses being less frequent sources of fluid loss.

The body’s response to hypovolemia is to: 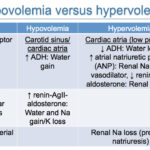 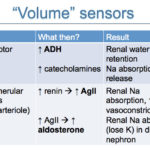 In order to respond, the body must first sense there is a problem, i.e. hypovolemia. This is accomplished baroreceptors in the carotid sinus, left cardiac atria and in the afferent arteriole within the juxtaglomerular complex of the kidneys. These sensors usually kick in when there is an 8-10% reduction in effective circulating volume and cause the following changes:

This is defined as increased effective circulating volume and is usually due to fluid retention. The main sources of fluid retention are the gastrointestinal tract (e.g. drinking) and kidney (e.g. under the influence of ADH).

The body’s response to hypervolemia is to:

In order to respond, the body must first sense there is a problem, i.e. hypervolemia. This is accomplished by low-pressure baroreceptors in the cardiac atria sinus and increased renal arterial pressure, which cause the following changes:

The body is able to sense and respond to changes in plasma osmolality (equivalent to tonicity), which is largely determined by serum sodium concentration (being the most abundant extracellular cation and effective osmol). Note that glucose also acts as an effective osmol in pathologic conditions, where it cannot be taken up into cells (e.g. lack of insulin as in diabetes mellitus or insulin resistance). The body responds to changes in tonicity by water excretion or gain and not by altering sodium balance (in contrast to changes in ECF volume, where changes in sodium and water balance occurs). As for ECF volume changes, the main organ responsible for control of osmolality is the kidney. Changes in effective osmolality or tonicity are sensed by osmoreceptors in the hypothalamus. These are stimulated by a change in plasma osmolality as small as 1-2% (1-3% in dogs). Activation of osmoreceptors causes changes in the thirst response and ADH release an actually stimulate maximal ADH release, demonstrating how tightly osmolality is regulated.

This is defined as decreased amounts of effective osmols, primarily sodium. Sodium can be low because of: 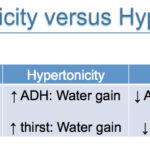 The body’s response to hypo-osmolality is:

Again, if hypovolemia or decreased effective circulating volume is concurrent, these dominate and ADH and aldosterone are released and the thirst response is stimulated, which tends to worsen the hyponatremia.

This is defined as increased amounts of effective osmols, primarily sodium, with glucose being an effective osmol with lack of insulin. Sodium can be high because of:

The body’s response to hypertonicity will lead to water retention by stimulation of: