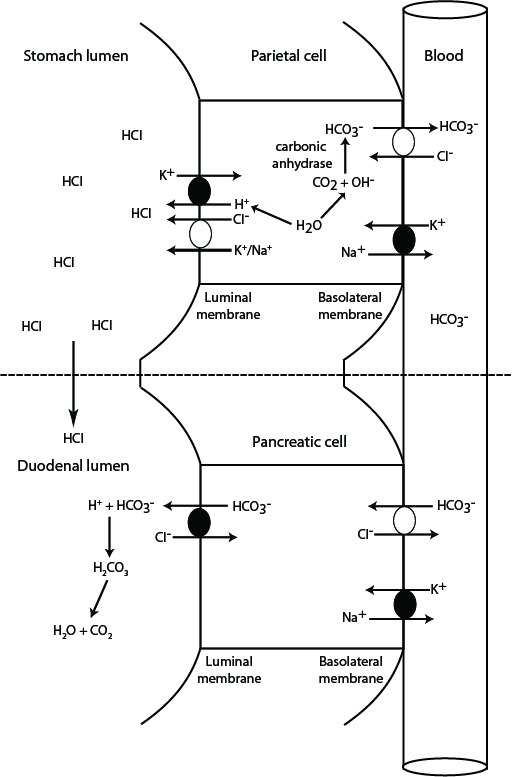 This diagram depicts how hydrochloride acid is excreted into the stomach, in exchange for generation of bicarbonate in the blood. The generated bicarbonate is then taken up from blood by the pancreas and excreted into the small intestine with pancreatic secretions, where it neutralizes the HCl that has entered the duodenal lumen from gastric emptying. Any gastric or abomasal outflow obstruction (e.g. gastric dilation volvulus in dogs or left or right displaced abomasum in ruminants) or vomiting of gastric contents in small animals will prevent HCl from entering the duodenum and the stomach-generated bicarbonate in blood will not be neutralized resulting in hypochloremia and metabolic alkalosis (high bicarbonate in blood). Gastric/abomasal excretions can also contain sodium and potassium, resulting in loss of these electrolytes as well (to a far lesser extent than HCl).
1. Stomach: In the gastric parietal cell, hydrogen and bicarbonate are generated from water and carbon dioxide (which freely filters into cells from blood) by carbonic anhydrase. The hydrogen is actively pumped out into the gastric lumen via a hydrogen/potassium ATPase pump at the luminal surface. Chloride also exits into the gastric lumen, with potassium or sodium, and combines with hydrogen forming hydrochloric acid. The chloride is obtained by the parietal cell from blood and exchanges with bicarbonate (generated by carbonic anhydrase) via a basolateral chloride/bicarbonate exchanger (the energy for which is derived from a basolateral sodium/potassium pump). Most of the sodium and potassium are resorbed into the parietal cell. In this way, blood leaving the stomach is “rich” in bicarbonate.
2. Intestine: With a normal functioning stomach, the secreted Hcl enters the duodenum on gastric emptying. Exocrine pancreatic cells take up the bicarbonate from blood leaving the stomach, in exchange for chloride. The bicarbonate is then actively excreted into the pancreatic secretions. Once these enter the duodenal lumen, the bicarbonate neutralizes the hydrogen in hydrochloric acid, forming carbonic acid, then water and carbon dioxide, and the released chloride is resorbed.

In this way bicarbonate is “generated” in stomach blood vessels and “extracted” in pancreatic vessels, resulting in a neutral pH in blood leaving the duodenum. Similarly, chloride is “extracted” from blood in the stomach and “returned” to blood in the duodenum. Inability of the body to neutralize the hydrochloric acid results in retention of bicarbonate in blood (with concurrent loss of chloride) and a metabolic alkalosis. Note, vomiting of duodenal contents (containing pancreatic bicarbonate-rich secretions) will result in a hyperchloremic bicarbonate loss acidosis.