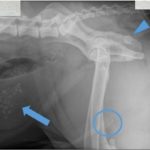 The urinary bladder was moderately distended and contained many, variably-sized but small (< 0.9 cm), irregularly-shaped, faintly opaque mineral calculi. The urethra contained five, small (< 0.8 cm) round, faintly opaque mineral calculi at the caudal aspect of the os penis (Figure 1a). Differential diagnoses for radiopaque urinary calculi include calcium oxalate, calcium phosphate, and struvite. Silica, urate, and cystine stones may be radiolucent, or faintly radiopaque. As in this case, larger cystine stones are sometimes radiopaque.1 Note the superimposition of the ischiatic tuberosity on the ischial body (arrowhead). This is not a stone.

Moderate numbers of variably sized, flat, colorless, transparent, hexagonal crystals were seen individually, in aggregates, and in short, laminated stacks throughout the sample. Also noted are moderate numbers of sperm and rare white blood cells. There were also a few bilirubin crystals (Figures 2a, 4).

We have previously seen bilirubin crystals in urine without a positive reaction for bilirubin on a dipstick. We have attributed this to lack of solubilization of the bilirubin (remains in crystal form) so that it cannot react with the chemical pad. Bilirubinuria (conjugated bilirubin), even in minimally concentrated urine such as in this case, may not be an abnormal finding due to the low renal threshold for bilirubin excretion, particularly in ale dogs. This dog had no evidence of liver disease or, specifically, cholestasis to explain the bilirubinuria. The USG of 1.014 in a dehydrated dog would normally be concerning for defective urine concentrating ability. However in cases of urinary tract obstruction, the USG is an inaccurate indicator of tubular function. Urinary tract obstruction causes pressure upstream as urine continues to be produced but is not eliminated. This leads to dilation of the collecting system, increased tubular hydrostatic pressure in the proximal and distal tubules and, eventually, in the glomerular tuft. Within several hours, an interstitial inflammatory infiltrate develops, likely secondary to the intratubular pressure.2 If the obstruction is treated promptly, patients may regain normal tubular and glomerular function and may not go on to develop permanent tubular injury. After relief of obstruction, there is frequently a post-obstructive diuresis, which may take 24-72 hours to resolve. In addition, it may take up to two weeks for the interstitial inflammatory injury to resolve.2 Both of these factors will continue to affect the USG, precluding its use for evaluation of tubular function. So while pre-existing renal dysfunction cannot be excluded in this dog, it also cannot be confirmed for the above-stated reasons. The trace proteinuria may not be an abnormal finding.

The patient was sedated and the urethral stones were retropulsed back into the urinary bladder. An indwelling urinary catheter was inserted and the patient was treated overnight with intravenous fluids to correct dehydration, analgesic agents, and supportive care. The following day, an exploratory laparotomy with cystotomy to remove the uroliths was performed. The dog recovered uneventfully and was discharged the following day. The mildly increased sodium and chloride concentrations were attributed to lack of water intake with possible concurrent fluid losses through the kidney (possibly from decreased renal tubular function). A single episode of vomiting would not be expected to result in such changes.

Despite ongoing management with a purine-restricted, alkalinizing diet (Royal Canine UC), this patient presented as an emergency one year later with signs of lower urinary tract obstruction. Unfortunately, during this episode, retropulsion of the urethral stones was unsuccessful and the patient underwent exploratory laparotomy, cystotomy, prescrotal castration, and prescrotal urethrostomy. Urine culture found growth of a resistant strain of Enterococcus fecalis.

Cystinuria is a rare inborn error of amino acid metabolism affecting many breeds of dogs, and may be the first of these disorders recognized in dogs.3 There are many affected breeds, including the English Bulldog, Scottish Deerhound, Newfoundland, Chihuahua, Dachshund, Mastiff, Bullmastiff, American Staffordshire Terrier, Welsh corgi, Rottweiler, Miniature Pinscher, Jack Russell, and mixed breed dogs.4,5 An inherited proximal tubular defect results in failure to reabsorb dibasic amino acids from the ultrafiltrate in the proximal tubule. Cysteine, ornithine, lysine, and arginine reabsorption are all affected, but only cystine crystals are found in the urine, as the others amino acids are more soluble.6,7 The amino acid cystine is formed when two smaller cysteine amino acids are joined by a disulfide bond. Cystine is relatively insoluble in urine. As it accumulates, the molecules will organize into crystals, and then grow to form uroliths. This process is favored in a concentrated, acidic urine. The case presented here is unusual due to the persistence of cystine calculi within alkaline urine (Question 2). Although there are inherent inaccuracies with pH measurement of the dipstick, the presence of cystine crystals in an alkaline pH should prompt urine culture. A concurrent bacterial infection will contribute to intermittent alkaline pH without dissolution of cystine uroliths or crystals, as seen in this case where the urine culture was positive despite the lack of bacteria in the urine sediment. On microscopic sediment examination, cystine crystals will appear as flat, colorless, variably sized, hexagonal plates occurring individually, in aggregates, and in short, laminated stacks. While these can fill the renal collecting system, causing renal stasis and kidney damage, they are more likely to cause damage via urethral obstruction.

The clinical presentation of cystinuria and the degree of stone formation varies among affected dogs (and humans). Clinical signs include stranguria, pollakiuria, and hematuria, which are typical signs of cystitis. While crystalluria without calculi is reported in female dogs, males are more likely to develop urethral obstruction, and intact males are more likely to be affected than castrated males.8,9 The size, shape, and radiolucency of cystine calculi can vary. Larger stones are often visualized on radiographs, but ultrasonography or contrast cystourethrography may be needed for identification of smaller stones.1

Multiple gene mutations and patterns of inheritance have been identified in human beings and dogs with cystine crystalluria and urolithiasis.10–14 Approximately 70% of human cases are associated with defects in genes encoding the dibasic amino acid transporter (b0,+). This protein is a heterodimer consisting of products from two genes, SLC3A1 (heavy chain) and SLC7A9 (light chain). In humans, the disease has classically been differentiated into Type I or non-type I cystinuria (types II and III). The different types are distinguished by patterns of inheritance and urinary excretion of amino acids in heterozygotes. Type I patients have an autosomal recessive mode of inheritance and heterozygous carriers have normal urine amino acid concentrations in urine. In contrast, non-type I patients have an autosomal dominant trait and some degree of calculi formation in heterozygotes, due to excess (high, type II, usually cystine and lysine) or (moderate, type III) dibasic amino acid excretion in urine. In newer schemes, cystinuria is divided into A and B subtypes based on the genetic defect, with A and B being due to defects in SLC3A1 and  SLC7A9, respectively. Some human patients have mixed types (e.g. I-II) and a combined defect (AB).11,12

Mutations in the amino acid transporter also cause the disease in dogs. Type I-A cystinuria is recognized in Newfoundlands, Lanseers and Labrador Retrievers. The first two breeds have an autosomal recessive pattern of inheritance and the underlying renal tubular defect results in formation of calculi in juvenile or adult homozygous dogs of both sexes, independent of neutering status.10,13 Genetic studies have identified a mis-sense mutation in exon 2 of the SLC3A1 gene in Newfoundland dogs.13 A one base pair mutation in SLC3A1 resulting in a frameshift with a premature stop codon has been identified as the genetic defect in Labrador Retrievers.6,13 At least two mutations, both with an autosomal dominant inheritance pattern, have been identified in Australian Cattle Dogs and Miniature Pinschers with Type II cystinuria. Australian Cattle Dogs have a six base pair deletion in SLC3A1, whereas Miniature Pinschers have a missense mutation in the SLC7A9.6 Mastiffs, Scottish Deerhounds, and Irish terriers have a variant form of cystinuria, which is termed type III. This appears to only manifest in intact adult males, however, dogs as young as six months of age may be affected.5,15 While the molecular basis and mode of inheritance in these breeds is, as yet unknown, the development of calculi appears to be testosterone dependent.8

Treatment of cystinuria will depend on the clinical manifestations of the disorder (Question 3). Animals with urethral obstruction typically require surgical intervention, particularly if retropulsive efforts are not successful or contraindicated. Surgery is often used to remove uroliths, as done in this case. Similarly, ureteroliths are usually treated by ureteral stenting. Medical dissolution may be performed in some cases and usually consists of dietary modifications, specifically alkalinizing diets (because cystine is increasingly soluble in urine with pH above 7.5).16 Such diets are also used for long-term prevention, as attempted in this case, along with increasing water intake (e.g. use of a canned diet, adding water to food). However, if urine alkalinization is not achieved through diet alone, oral potassium citrate can be added. Treatment with 2-mercaptopropionylglycins (2-MPG, tiopronin, Thiola) or D-penicillamine is recommended in recurrent cases.17 These medications promote formation of disulfide bonds between the cysteine amino acids and the thiol compound, resulting in a more soluble cysteine-thiol drug complex.9,18 Due to antimicrobial resistance, antibiotics should be used with discretion. Castration may be considered in intact male dogs from breeds with suspected type III cystinuria, particularly with recurrent cases and to prevent transmission of genetic defects. However, the effects of castration are not predictable and surgery does not always reduce cystinuria in all dogs.6,8,17

The authors would like to thank Drs. Erin Epperly and Benjamin Rivard for their assistance with radiographic interpretation.