The Coombs test that is performed at Cornell University is a direct Coombs test, which is testing for the presence of antibody or complement (C3) on red blood cells (RBCs). It is generally performed as a supportive diagnostic test for immune-mediated hemolytic anemia (IMHA) and is most commonly performed in dogs, cats and horses. 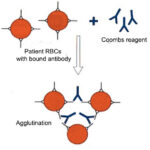 Principle of a direct Coombs test

With this test, we collect EDTA-anticoagulant blood from the patient with suspected IMHA, wash the RBCs free of plasma, then create a 2% suspension (approximately) of washed RBCs, which are then incubated with a Coombs reagent. The nature of this reagent varies with the manufacturer and is specific for each species. The reagent used at Cornell University contains polyclonal antibodies against IgG, IgM and complement C3 in dogs, cats or horses (again, species-specific reagents are required, which is why the test is limited to these species). We then assess for the presence of agglutination microscopically in all species. If any of these immune proteins are bound to the patient’s RBCs, a positive Coombs test may be obtained (this does depend on the number of attached immune proteins). We also dilute out the Coombs reagent to ensure we do not miss a positive Coombs’ test due to the prozone effect (high concentrations of bound antibody or complement may result in a false negative Coombs’ test if not diluted).

There are different methods for detection of a positive Coombs’ reaction, including microtiter plate (as performed at Cornell University, see image below), capillary, gel and immunochromatographic strips (Caviezel et al 2014) and for test performance (e.g. temperature of detection – we perform ours at 37ºC). Factors affecting test performance have been reviewed (Wardrop 2005). The four methods were compared in 46 anemic and 59 non-anemic dogs, with 33 of the anemic dogs being suspected to have IMHA and two Coombs reagents (a rabbit and a goat anti-canine reagent) from different suppliers were tested in the microtiter method. The Coombs test (using a rabbit anti-canine reagent) was positive in 20 anemic dogs and negative in all non-anemic dogs. Most of the 20 anemic dogs with a positive Coombs test also had spherocytosis (15/20) and autoagglutination (16/20) supporting a diagnosis of IMHA (Caviezel et al 2014). The remaining 26 anemic dogs that were negative on Coomb’s testing were found to have anemia due to reasons other than IMHA (e.g. cancer), although clinicians still suspected this diagnosis in some of these dogs (and some had been treated for months or years with immunosuppressive therapy). Results were quite comparable between the microtiter, capillary, gel and strip methods (kappa of >0.93), although false negatives and positives were observed with non-microtiter methods. This study also showed that two Coombs’ reagents gave similar results in 19 dogs and test performance was not affected by temperature (4, 22, 37°C) with the microtiter method. One dog had a positive Coombs’ test with the rabbit-based reagent, but was negative with the goat-based reagent (it is unclear if this dog did have IMHA). 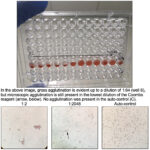 A positive result indicates the presence of antibody (IgG or IgM, depending on reagent) or C3 on the patient’s RBCs, indicating an immune-mediated component to the anemia. However, this may not mean that the main mechanism of the anemia is immune-mediated destruction, particularly if a weak Coombs’ test is obtained, e.g dogs with histiocytic sarcoma (personal observations, Caviezel et al 2014). Positive Coombs’ reactions are observed in dogs with IMHA, but also in animals with infectious disease (e.g. Babesia canis, Mycoplasma haemofelis) and cancer. The study by Caviezel et al 2014 showed that storage at 4°C for 7 days did not affect results. Prior transfusions (up to 21 days before testing) or corticosteroid therapy (in a limited number of dogs) do not seem to result in a positive or negative Coombs’ test, respectively. Anemic dogs with a positive test remained positive on retesting for at least 3 days (with some having positive test results for over 10 days). In contrast, autoagglutination can be seen in dogs with and without IMHA, but usually does not persist with RBC washing, unless the dog has IMHA (Caviezel et al 2014).

This does not rule out IMHA and if there are numerous spherocytes or agglutination that persists after washing (particularly microscopic agglutination that is distinguished from rouleaux formation), a negative Coombs’ test should not be used to rule out IMHA. Reasons for a false negative Coombs’ test include a weak affinity antibody that is removed during washing, low numbers of adherent IgG/IgM or C3 on RBCs, bound immunoglobulins or complement eluting with storage, etc (Wardrop 2005).