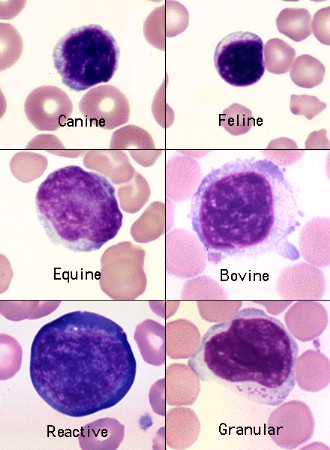 Note, that although specific species are indicated below each lymphocyte, all such lymphocytes can be seen in any species. The lymphocytes in the dog and cat are classic small cells with smudged or smooth chromatin (heterochromatin) and scant amounts of light blue cytoplasm. Nuclei are round to slightly indented or irregular (as seen in the dog). The lymphocytes in the horse and cow are more intermediate in size with lighter chromatin but still clumped chromatin (heterochromatin) and more irregular nuclear outlines (in the horse, at least). The bovine lymphocyte also has increased amounts of light blue cytoplasm (a variant of normal, not a reactive cell). These lymphocytes often dominate in the blood of cattle. The reactive lymphocyte is large with smooth deep blue cytoplasm (lots of RNA) and a single small clear cytoplasmic vacuole. The chromatin is quite clumped. The granular lymphocyte is also from bovine blood, but could be seen in any species. The cell contains a scattering of red cytoplasmic granules, located in an indentation of the nucleus. The cell is small to intermediate in size and has slightly increased amounts of cytoplasm. 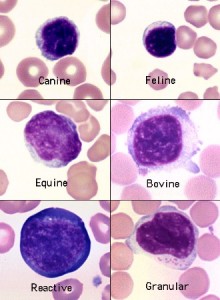