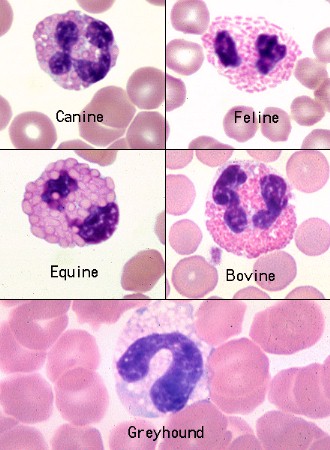 Eosinophils in the dog have round granules and a light blue cytoplasm. Eosinophils of the cat have small rod-shaped orange granules that fill the cytoplasm, while those of the horse have very large globular orange granules. Ruminant and camelid eosinophils have many small very round orange granules. Camelid granules resemble those of ruminants. A “vacuolated” eosinophil from a Greyhound is also shown. This lacks visible granules (granules also lack myeloperoxidase) and mimics a monocyte or a toxic band neutrophil, except that the cytoplasm contains far more vacuoles than is typical for either of the latter cells. Such eosinophils can also be seen in other sighthounds and Golden Retrievers. 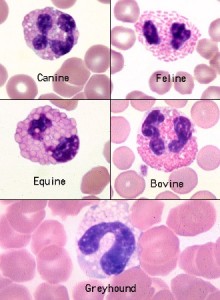