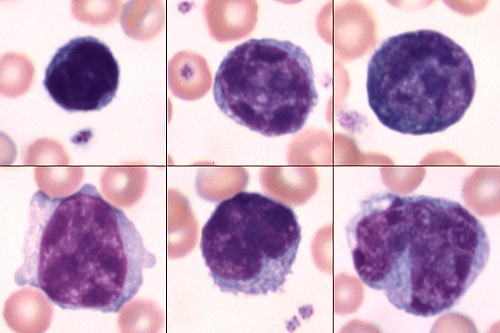 Bovine lymphocytes vary substantially in size and appearance. Normal small lymphocytes, such as that seen in the upper left hand image, are seen in low numbers, whereas intermediate lymphocytes (middle upper panel and left and middle lower panel) dominate. Increased numbers of intermediate lymphocytes can be seen in cattle infected with Bovine Leukemia Virus. There is also a reactive lymphocyte, which is also intermediate in size but has deeper blue cytoplasm than normal, in the upper right panel. The lower right panel shows a monocyte, which strongly resembles (and must be differentiated) from an intermediate to large lymphocyte. Generally monocytes have more pleomorphic nuclei (versus round to indented) and more abundant cytoplasm and usually contains more cytoplasmic vacuoles than a lymphocyte (although some reactive lymphocytes can also contain vacuoles). Monocytes also have more uniformly grainy blue-gray cytoplasm versus the deeper smooth blue of a reactive lymphocyte. Note that lymphocytes that are mature have clumped chromatin (heterochromatin) and can have round to indented to irregular nuclear outlines. 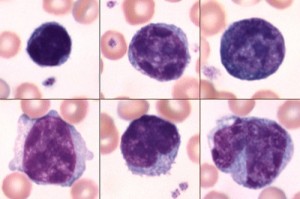