Other hematopoietic-derived leukocytes that are not normally seen in blood include histiocytes (a global term applied to either dendritic cells or macrophages) an mast cells. 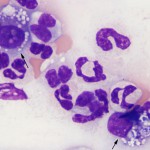 Histiocytes is an umbrella term comprising monocyte-derived macrophages and dendritic cells. All of these cells are derived from a common myeloid progenitor in the bone marrow and are antigen-presenting cells. These cells are not normally in blood, but cells resembling macrophages (eccentric round nuclei, abundant vacuolated cytoplasm, phagocytic activity) can be seen in blood in both reactive and neoplastic conditions. Reactive conditions include inflammation, immune-mediated hemolytic anemia, and infectious agents (e.g. systemic mycoses like histoplasmosis and protozoal infections, such as cyatauxzoonosis). In some of the latter cases, the causative organism may be observed within the cell (and potentially neutrophils as well, since neutrophils can also be phagocytic). In cases of hemolytic anemia, macrophages may be erythrophagocytic and/or contain hemosiderin in the cytoplasm, obtained from iron within the porphyrin ring of phagocytized hemoglobin. Hemosiderin may also be seen in neutrophils and monocytes (with the cells being called sideroleukocytes) in this setting. In rare cases of dogs with cholestasis, we have seen bile casts within neutrophils and histiocytes (see canine blood gallery). Erythrophagocytic activity by monocytes or macrophages in blood and hemosiderophages (macrophages with hemosiderin in their cytoplasm) can be seen in reptiles secondary to tissue hemorrhage (George et al 2008). Such a mechanism is also conceivably possible in other species although is not recognized as such. Histiocytes or macrophages can also be observed in blood in histiocytic and non-histiocytic neoplasia, such as lymphoma and hemangiosarcoma. Large numbers of histiocytes, particularly those with abnormal nuclear features, should raise suspicion for underlying histiocytic sarcoma or dendritic leukemia (a rare variant of leukemia) (Allison et al., 2008). Macrophages can also be an artifact of storage (monocytes can become activated over time in vitro and resemble macrophages). 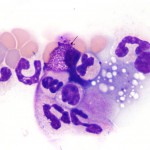