Platelets also have pink granules in their cytoplasm. The granules are less discernible in some species, such as the horse. Loss of granulation can be seen if platelets become activated for any reason (platelets de-granulate) or if they imbibe water. Laser-based hematology analyzers, such as the ADVIA 2120, can provide a measurement of the internal complexity (granularity) of the platelet, as the mean platelet component (MPC). This is analogous to laser-based measurement of hemoglobin concentration (cellular hemoglobin [CH] and corpuscular hemoglobin concentration mean [CHCM]) in red blood cells. Accurate values for the mean platelet component  are only obtainable if platelets are sphered adequately in the analyzer.

Platelets are generally round to oval, however elongated and spindled forms can be seen in some animals. Platelets that have been slightly activated in the sample or by contact with the glass slide (as is common in feline samples) can have a stellate form with dendritic processes (see figure of the cat platelets below).

Comments on platelets in the different domestic species are given below. 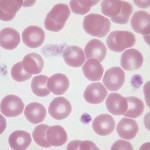 Canine platelets are moderately variable in size; platelet granules are well-stained. This field is a good representation of the “red cell area” of the smear. It is in this area that the estimate of platelet numbers should be made. 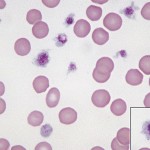 Cat platelets tend to vary more in size than dogs, with many large platelets being seen in blood from non-diseased or healthy cats. Platelets are also readily activated on blood sample collection in cats and clump frequently, precluding accurate platelet counts in many individuals of this species. The best way to avoid platelet clumping is clean venipuncture and a steady blood draw, with minimal agitating of the sample. Despite best intentions and techniques, platelets can still clump. 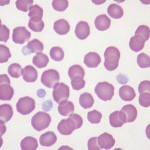 Equine platelets tend to be rather uniform in size and shape. The platelet granules stain very lightly with routine hematology stains, making the platelets faint and sometimes difficult to see at lower magnifications. Platelet counts in horses are often lower than in other species. 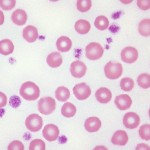 Bovine platelets are moderately variable in size with granules that are numerous and intensely-stained. Platelet counts tend to be high in health, especially in calves where counts in the neighborhood of one million/µL are common.