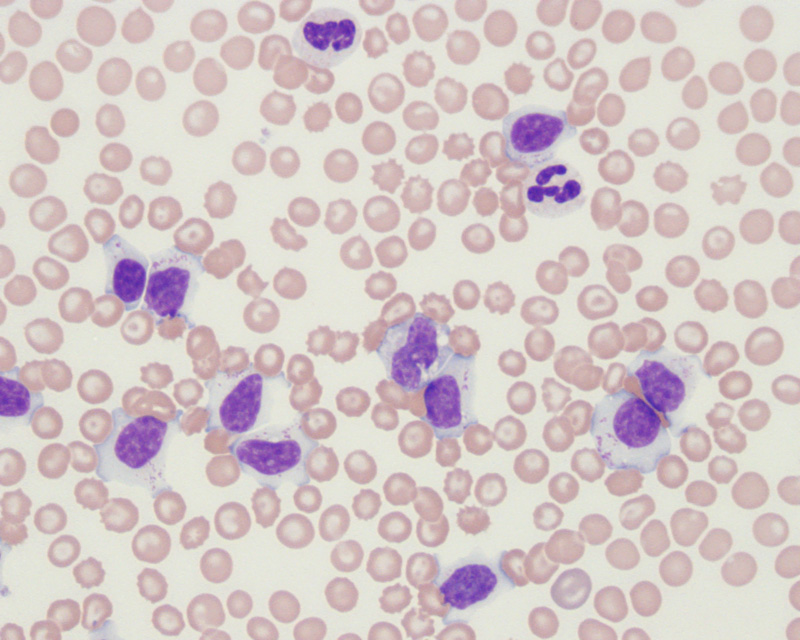 This dog had a marked leukocytosis (80,000/uL) consisting of small lymphocytes with clumped (heterochromatin) chromatin and increased amounts of light blue cytoplasm. Low to moderate numbers of light red granules are seen in the cytoplasm of the cells, indicating that they are a granular lymphocyte. The neutrophil, RBC and platelet counts were normal (platelet clumps were identified at the feathered edge of the smear). Several target cells and some acanthocytes are evident in the red blood cells. The latter indicate a degree of fragmentation injury, that is insufficient to result in an anemia (the target cells and acanthocytes could reflect liver infiltrates by the tumor cells, but this was not confirmed) (Wright’s stain, 500x magnification). The leukemia was phenotyped with flow cytometry and the tumor cells were a cytotoxic T cell (positive for CD3, CD8, CD11d, TCRαβ). Although Ehrlichia canis can cause a granular lymphocytosis, the lymphocytosis is usually not to this degree. The dog was negative for Ehrlichia in serologic testing. The leukemia was indolent and slowly progressive, with the dog surviving for more than 2 years after initial diagnosis. 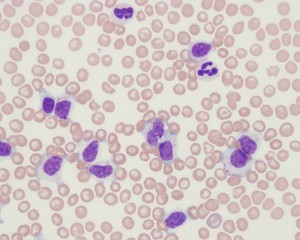