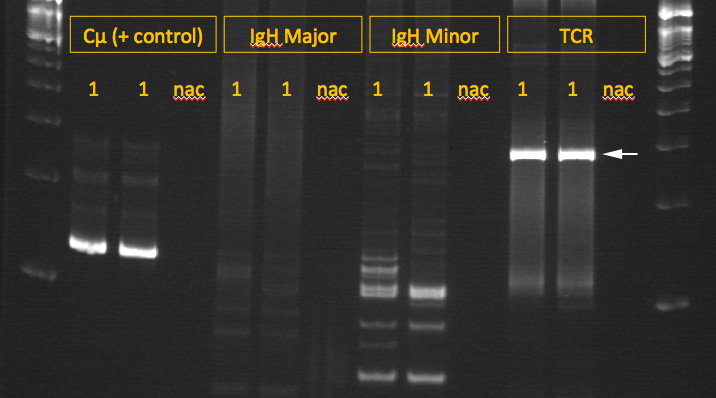 Agarose gel of polymerase chain reactions for clonal rearrangements in the B cell receptor (IgM heavy chain) or T cell receptor (gamma chain) of DNA from the lymph node of a dog with lymphoma (documented by cytologic examination of lymphoid tissue). The DNA was isolated from one of the cytologic smears. Reactions were run in duplicate (1, 1) and two primer sets were used for the B cell receptor (IgH Major and IgH Minor). Lanes at each end contain a molecular weight marker, the Cu lanes represent a positive control, and lanes marked “nac” contain a no amplification control (water). Multiple bands are observed for both primer sets for the IgM chain indicating a polyclonal B population. In contrast, a strong single band is seen with the TCR primer set (arrow), indicating a clonal T cell population and supporting a diagnosis of T cell lymphoma. Note, that this testing should not be done in isolation but should always be adjunctive to cytologic or histologic assessment of the tissue (since false positive reactions or “pseudoclonality” can be observed in some samples). In addition, clonality should not be done to distinguish an acute lymphoid from myeloid leukemia since clonally arranged receptors (particularly T cells) can be seen in both types of leukemia. The positive control demonstrated a single clonal band and no bands are seen in the water controls, as expected. 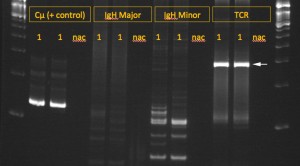