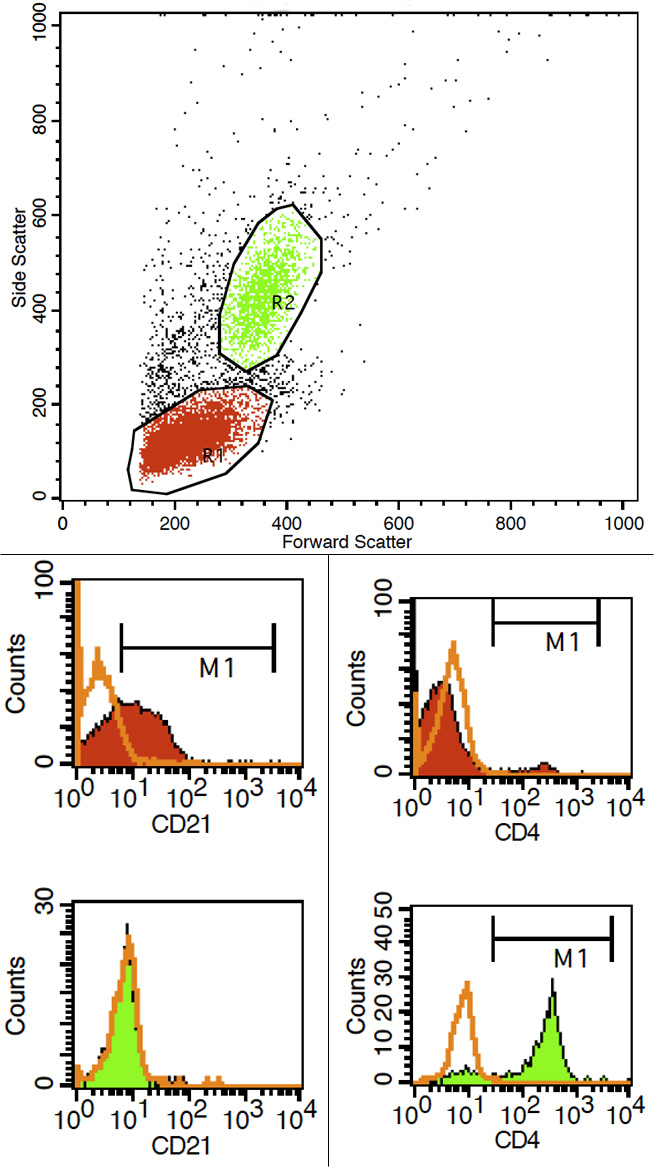 This compilation of images demonstrates flow cytometric immunophenotyping of lymphocytes in a dog with moderate lymphocytosis (45,000/uL). In a blood smear, the cells were small with nondescript nuclei, no nucleoli and a small amount of light blue cytoplasm. The dog lacked cytopenias and the hematologic diagnosis was a chronic lymphocytic leukemia.
Upper panel: This demonstrates the forward (size) and side (internal complexity) dot plots of leukocytes in blood. The cells in question fall into the lymphocyte (red, R1) gate and are small (median forward scatter [FSC] of 256 units), whereas neutrophils (green, R2) are larger (median FSC of 360 units) and have more internal complexity. A few monocytes are discernible between these two clusters of cells.
Left lower panel: The cells were labeled with an antibody for human CD21 (which crossreacts very well with the dog antigen) and then a frequency distribution curve (histogram) plot was created for both gates (R1, R2). About 62% of the cells in the lymphocyte gate (red) are positive (M1 region) for CD21, a B cell marker (green represents an overlay with the isotype control). In contrast, neutrophils are negative as expected for CD21. The cells were also positive (72%) for another B cell marker, CD22 (not shown) and were negative for CD34 (stem cell marker).
Right lower panel: The cells were also labeled with an antibody against canine CD4 and a histogram curve was generated for both gates. A few cells in the R1 lymphocyte gate are positive for CD4, a marker of helper/regulatory T cells, likely representing residual normal T lymphocytes. In contrast, the majority of cells in the neutrophil gate are positive for CD4 (M1 region), as expected for canine neutrophils (which are a good internal control for this antigen). 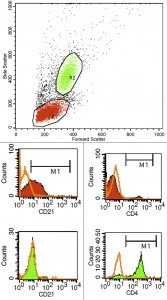