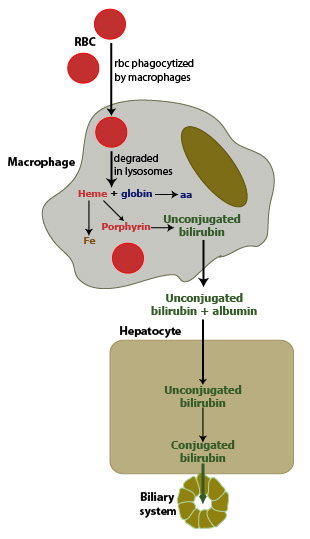 With extravascular hemolysis (which is normally how effete RBC are removed from the circulation, i.e. they are past their use by date), macrophages phagocytize RBC expressing phosphatidylserine (undergoing apoptosis or eryptosis) or with bound antibodies (e.g. immune-mediated hemolytic anemia or IMHA, effect RBC) or complement (e.g. IMHA). Once phagocytized, the RBC is lysed within the phagosome, releasing hemoglobin. Hemoglobin consists of a heme group (iron in a porphyrin ring) and globin chains. The globins are broken down to amino acids, which are then used for protein synthesis.
The porphyrin ring of heme is oxidized by microsomal heme oxygenase, producing biliverdin and releasing the iron (Fe3+). The iron can then be 1) exported into plasma through ferroportin (an iron channel, controlled by hepcidin), where it binds to apotransferrin (the iron transport protein in plasma) forming transferrin; 2) stored within cells, by binding to the protein, apoferritin, forming ferritin. With time, ferritin becomes oxidized and degrades to form hemosiderin. Hemosiderin can be visualized within macrophages as a dusky blue-gray pigment and can be definitively stained with Prussian blue (which turns hemosiderin blue); or 3) incorporated into other enzymes for use (e.g. cytochrome P450).
In the meantime, the porphyrin ring is converted to biliverdin, which is then reduced by biliverdin reductase to unconjugated bilirubin, which is water insoluble. The unconjugated (indirect) bilirubin is released into the plasma, where it binds to albumin (to render it water-soluble) and is taken up by specific receptors in hepatocytes. Once within the hepatocyte, the unconjugated bilirubin is conjugated, and exported by specific transporters into bile. Thus, extravascular hemolysis will result in increased presentation of unconjugated bilirubin to the hepatocyte. If the ability of the hepatocyte to take up and conjugate this bilirubin is overwhelmed, unconjugated bilirubin will accumulate in plasma, causing an increase in total and indirect bilirubin. Conjugated bilirubin does not usually increase in this setting, unless there is concurrent issues with bilirubin excretion into bile (cholestasis), which can and does occur in some forms of hemolytic anemia, e.g, immune-mediated hemolytic anemia in dogs and neonatal isoerythrolysis in foals.
Note that unconjugated bilirubin can also be produced from intravascular hemolysis (i.e. when hemoglobin-haptoglobin complexes are phagocytized by the haptoglobin receptor on hepatocytes or CD163). However, haptoglobin is rapidly saturated so most of the unconjugated bilirubin usually comes from extravascular hemolysis, which is seen concurrently with all causes of intravascular hemolysis (other than a peracute osmotic lysis, e.g. administration of pure water to an animal). 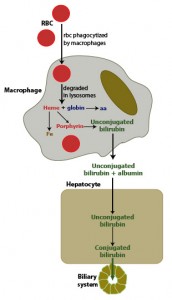