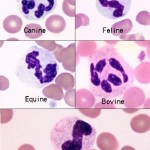 Normal mature neutrophils of several species are shown at the right.

Rabbits, birds, amphibians and reptiles have heterophils. In contrast to the inconspicuous granules of neutrophils, granules in heterophils are large and stained deep orange to red.