The liver has a dual blood supply with the portal vein supplying 60‐70% of the blood flow to the liver, the remainder being supplied by the hepatic artery. The efferent blood flow is via the hepatic vein which enters the caudal vena cava. 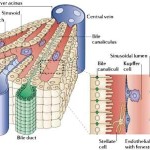 The liver is composed of plates of hepatocytes, between which run the hepatic sinusoids where blood from the portal vein and hepatic artery mix and flow through to the central vein. The sinusoids are lined by phagocytic Kupffer cells and hepatic stellate cells (or Ito cells) inhabit the space of Disse and function as storage centers for vitamin A and have potential to differentiate into myofibroblasts in the fibrotic liver. Small membrane indentations in adjacent hepatocytes form the bile canaliculi, into which bile is secreted, eventually draining into the hepatic duct, gall bladder and finally into the duodenum via the common bile duct.

Hepatocytes are specialized polygonal cells with high metabolic activity whose features reflect the multitude of functions of the cell:

The liver is a complex organ with a multitude of functions. Understanding liver function facilitates the interpretation of clinical pathology data. Listed below are some of the functions of the liver that are relevant to the clinical pathology changes observed in liver disease.