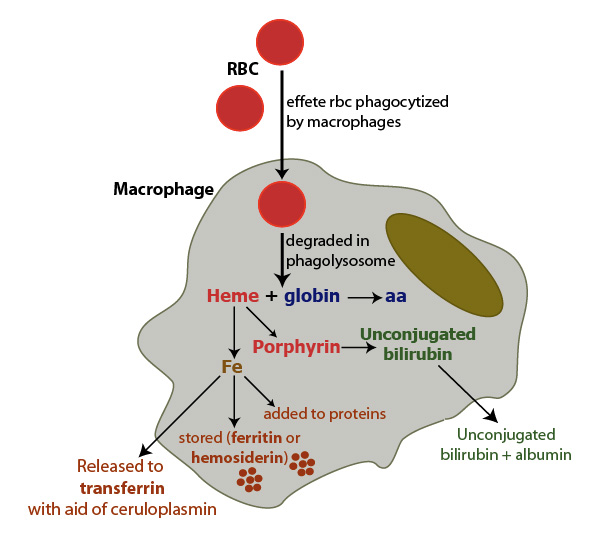 The main source of iron in the body is from turnover of hemoglobin in red blood cells. This is accomplished by macrophages which phagocytize effete RBC in physiologic states or normal RBC in pathophysiologic states (hemolytic anemia). Once taken up by the macrophages, RBC are degraded in a phagolysosome which liberates hemoglobin, consisting of a heme group (porphyrin ring + iron) and globin chains. The globins are broken down to amino acids (aa), which are then used for protein synthesis. The porphyrin ring of heme is oxidized by microsomal heme oxygenase, producing biliverdin and releasing the iron. Biliverdin is reduced by biliverdin reductase to unconjugated bilirubin. The unconjugated bilirubin is released into the plasma, where it binds to albumin and is taken up by hepatocytes (not shown). Once released from the heme group, iron has three fates:
1. The iron can then be exported into plasma through iron channels, where it binds to apotransferrin (the iron transport protein) forming transferrin. In order for this to be accomplished, iron must be converted to the Fe2+ state, which is facilitated by the copper-dependent enzyme, ceruloplasmin. Thus, copper is required for iron release from macrophages or enterocytes (haephestin is copper dependent).
2. Iron can be stored within cells as ferritin, i.e. after the iron is bound to the storage protein, apoferritin. With time, ferritin becomes oxidized and degrades to form hemosiderin. Hemosiderin can be visualized within macrophages as a dusky blue-gray pigment and can be definitively stained with Prussian blue (which turns hemosiderin blue).
3. The iron can be immediately incorporated into proteins that need it, e.g. cytochrome P450. 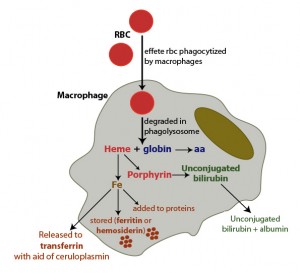