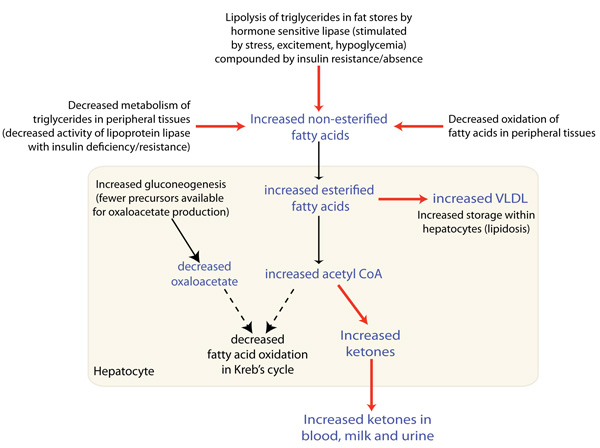 The building block of ketones is NEFAs, which are released from fat stores by lipolysis. NEFAs are esterified in the liver, transported to mitochondria, and are oxidized to acetyl CoA. Within mitochrondria, acetyl CoA can be oxidized in the Kreb’s cycle, producing ATP (energy), or converted to ketones. Oxidation within the Kreb’s cycle is dependent on the availability of cycle intermediates, particularly oxaloacetate (which is also used to produce glucose). In conditions associated with insulin resistance (e.g. hyperadrenocorticism, pregnancy) or deficiency (Type 1 diabetes mellitus) and states of negative energy balance (which stimulates glucose production), oxaloacetate is shunted out of the Kreb’s cycle for gluconeogenesis, thus causing less acetyl CoA to be oxidized for energy and promoting ketogenesis. In the cytoplasm, excess NEFAs can also be packaged into very low density lipoproteins (VLDL) which are transported into plasma or stored in the liver. In excess, this causes hepatic lipidosis. Thus, in states of negative energy balance (provides more NEFAs from lipolysis) or conditions causing insulin resistance (which decreases NEFA oxidation), ketogenesis is promoted, which can lead to clinical ketosis. 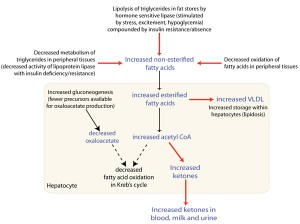