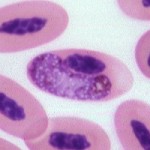 Hemoproteus is a commonly encountered and easily identified protozoan parasite that infects red blood cells in wild birds of many species. It is generally not associated with obvious clinical signs or evidence of hemolytic anemia (exceptions may occur in quail and pigeons).  The gametocytes vary in size, and the mature forms occupy a large proportion of the cytoplasm; the nucleus of the host cell is usually embraced rather than displaced. Brown to gold colored granules of pigment (derived from breakdown of hemoglobin, called hemazoin) are typically numerous in the cytoplasm of the gametocytes. 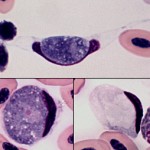 Parasites of the genus Leukocytozoon infect both domestic fowl (ducks, geese) and wild birds of many species. In most instances, the infection is without obvious clinical signs, although young raptors, waterfowl, and turkeys may develop hemolytic anemia on occasion.  Despite the name of the genus, it is now believed that the gametocytes seen in peripheral blood develop in erythrocytes rather than leukocytes. The extreme distortion of the host cell by the parasite, however, makes this difficult to appreciate. Both elongated and round gametocytes usually are seen; no pigment granules, as seen in Hemoproteus and Plasmodium spp., are present in Leukocytozoon gametocytes. 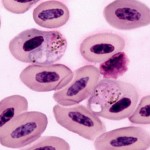 Plasmodium spp. are protozoan parasites which occur in many species of birds and are the cause of avian malaria. Transmitted by mosquitoes, infection with Plasmodium can be a cause of hemolytic anemia in some species (canaries, penguins, poultry, ducks, pigeons and falcons). In addition to pigment-bearing gametocytes (pictured), both trophozoites and schizonts may be observed in peripheral blood erythrocytes. Notice the distortion of the erythrocyte and the displacement of its nucleus by the large gametocytes. Plasmodium is very difficult to distinguish from Hemoproteus, since some species of Plasmodium can have similar halter-shaped gamonts to Hemoproteus and they both contain iron pigment. In general, Plasmodium gamonts tend to be smaller, oval versus halter shaped, and can indent the nucleus of the red blood cell more markedly than Hemoproteus gamonts. Definitive evidence for Plasmodium infection are the presence of schizonts or infectious stages in leukocytes and thrombocytes.