Upon cytologic evaluation, the direct smears were moderately cellular and contained a heterogeneous population of inflammatory cells admixed with numerous algal organisms. The inflammatory cells were a mixture of neutrophils (both degenerate and nondegenerate as well as pkynotic forms were noted), macrophages, and lymphocytes. The macrophages were often debris-laden (Figure 3a). The algal organisms consisted of endospores that ranged in shape from round to elongated with blocky ends (Figures 1-2a). The internal material was basophilic and granular in most of the endospores with low numbers containing more magenta material (Figure 2a). Rarely, endospores were seen in a dividing configuration with side-by-side endospores. A few of the endospores were found within neutrophils or macrophages. No radial arrangements of sporulation was seen. There were many empty casings from the organisms scattered throughout the sample. The background was stippled and contained protein crescents and a peppering of blue rod-like melanin granules (Question 2) (Figures 1-3a). The side-by-side pattern of endosporulation was suggestive of Prototheca (P.) zopfii rather than P. wickerhamii, which forms a more morula-type arrangement. For definitive diagnosis and speciation, culture and molecular testing is recommended (Question 3).

The differential diagnoses for chronic diarrhea would include inflammatory disease , infectious agents (e.g. fungi, protozoa), acquired exocrine pancreatic insufficiency (chronic pancreatitis or pancreatic neoplasia), or gastrointestinal neoplasia (lymphoma) (Question 1).  With the later development of panuveitis, suspicion for a disseminated condition, such as an infectious agent, would be higher on the list of differential diagnoses.  Protozoal or fungal-induced uveitis/chorioretinitis differential diagnoses would include systemic infections of Cryptococcus neoformans, Coccidioides immitis, Blastomyces dermatitidis, Histoplasma capsulatum, Toxoplasma gondii, Neospora caninum, and Leishmania donovani.1 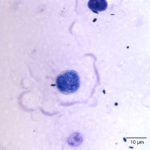 Prototheca spp. are a saprophytic unicellular algae that are included in the family Chlorellacae.2  They have been described to take on different shapes when viewed in tissue sections, being ovoid to oblong, versus in body fluids and cultures, in which the organisms are usually spherical.2  Prototheca spp. usually have a basophilic stippled cytoplasm surrounded by a thick clear cell wall with various stages of endosporulation for asexual reproduction.2  We have seen a previous case of ocular protothecosis in a 6 year-old neutered male Labrador retriever. In the latter case, the characteristic wedge-shaped endospores that look like a “Mercedes Benz Symbol” or “Peace Sign” were identified in a vitreal fluid aspirate (Figure 4).3  In comparison, this current case had rare endospores that were in a side-by-side configuration, suggesting that they were different species of the organism in these two animals.  In cytologic specimens, the thick cell wall can be seen as empty casings after the cell ruptures to release the endospores and continue the life cycle.1  Prototheca spp. must be differentiated from the green algae, Chlorella, that is included in the family Chlorellacae.1  Unlike Chlorella, Prototheca spp. lack chlorophyll, as a source of nutrition, as well as galactose and galatosamine in their cell wall.2  Prototheca spp. have been suspected to be a mutant of Chlorella since they can be produced in the laboratory by treating Chlorella with radiation and streptomycin.4  There are two pathogenic species of Prototheca – P. zopfii and P. wickerhamii.4 Prototheca spp. have been isolated from many different sources, particularly in raw sewage, cattle or swine manure, and tree slime flux.2 These sources have been used to divide P. zopfii into 3 different biotypes, with the third biotype being renamed to P. blaschkeae.2 Biotypes 1 and 2 have been isolated from cattle, with biotype 1 found in liquid manure and biotype 2 more often represented in cases of bovine mastitis.2 Biotype 3 was renamed because it is more commonly associated with swine manure.2  There does not seem to be any clinically significant differences in pathogenicity amongst the different biotypes, although in comparing the disseminated disease caused by P. zopfii biotype 2 to the cutaneous disease caused mainly by P. wickerhamii, P. zopfii biotype 2 appears to be more virulent.5  Infections with Prototheca tend to occur in immunosuppressed or immunocompromised patients since they are usually opportunistic pathogens that have low pathogenicity.2

In most cases, Prototheca spp. are usually found in specific sites in infected animals.2,4  P. wickerhamii has been isolated mostly from cutaneous lesions and is the most common organism in diseased humans and cats.4  Bovine mastitis protothecosis is more commonly caused by P. zopfii biotype 2.4  Dogs tend to have a much different disease process.4  They usually suffer from  a disseminated form of protothecosis with the target organs commonly being the gastrointestinal tract, central nervous system, and the eyes.2  The more commonly isolated Prototheca spp. in dogs is P. zopfii biotype 2 with P. wickerhamii being less common.2,4  Clinical signs associated with disseminated disease depends on the main affected organ system.1,2  Distal enteric disease (colitis) seems to be the most common form of disseminated disease in dogs,6  with chronic mucoid diarrhea and hematochezia.2  Less commonly reported gastrointestinal signs include melena, vomiting, and weight loss.2  Neurologic manifestations of protothecosis are associated with meningoencephalomyelitis.2  Clinical signs can include generalized motor deficits and seizures, blindness, deafness, ataxia, and central vestibular disease.  The blindness could be neurologically -related or due to ocular disease.2  Usually retinal detachment is the cause of blindness in patients with protothecosis.7  Other clinical signs associated with ocular disease include episcleral injection and ocular pain, anterior uveitis, corneal edema, and blepharospam, which can be unilateral or bilateral.7  As in this case, the diagnosis can be made from an aspirate of subretinal lesions of eyes that cannot be salvaged.7  Disseminated protothecosis has a grave prognosis since most patients have widespread disease at the time of presentation.2  A combination of antifungal medications, such as amphotericin B and itraconazole, can reduce clinical signs.2  There have been a few case reports of animals living longer with early aggressive therapy but they were eventually euthanized due to the disease.4

The diagnosis of protothecosis is usually made with a combination of methods.6   As seen in this case, cytologic evaluation can yield a presumptive diagnosis of protothecosis by observing the typical features of the organism in cytologic samples.6  Specimens that can be used for cytologic evaluation include urine sediment, cerebrospinal fluid, rectal scrapes, and vitreous humor.2,6  Biopsy of tissue with histopathologic examination and special staining can also reveal Prototheca spp.8  A case report of protothecal granulomatous meningoencephalitis in a dog revealed positive Periodic acid Schiff- and Gomori’s methenamine silver-stained oval to round organisms that had consistent morphologic features of Prototheca spp.8  Scanning electron microscopy has been used on rectal scrapings to diagnose protothecosis by revealing cylindrical -shaped cells with endospores in different developmental stages.6  Confirmatory diagnosis for protothecosis involves culture with subsequent molecular analysis for speciation.2,6  There is common genetic linkage between a human Prototheca spp. strain and a bovine isolate from Poland, suggesting that the algae has zoonotic potential.5