The impressions smears were of moderate to high cellularity and comprised of moderate numbers of round cells in loose aggregates and individualized on a background of peripheral blood. The round cells had moderate N:C ratios with light blue cytoplasm and variably defined cell borders. The cytoplasm often contained moderate numbers of medium-sized, well-circumscribed clear vacuoles that rarely aligned next to the cytoplasmic membrane. The nuclei were round to oval, central to eccentrically placed with finely stippled chromatin and variably distinct nucleoli. The cells displayed mild anisocytosis and anisokaryosis with a few mitotic figures observed (Figure 3). The aggregates of round cells were occasionally intercalated with low to moderate numbers of lymphocytes and eosinophils. The lymphocytes were small with high N:C ratios, a scant amount of blue cytoplasm, round to indented nuclei with coarse-to-clumped chromatin and indistinct nucleoli. Low numbers of plasma cells (Figure 2) and macrophages were noted.

Follow up: The mass became progressively more hemorrhagic and friable. During a follow-up examination with the Oncology Service, pieces of the neoplasm mechanically exfoliated and were submitted for histopathologic examination. The histopathologic diagnosis was a transmissible venereal tumor (Figures 4-5). The dog underwent chemotherapy, achieving complete remission.

This sarcoma was first described around 1876 by Nowinsky.1,2 It is the first described allogenic transplantable neoplasm, in which a clonal population of viable cells are known to “metastasize” into a new host. After inoculation, the cell(s) proliferate and form a noticeable mass or masses, approximately 4 to 6 months after exposure.2  This neoplasm, capable of defying nature’s most basic rule of antigen recognition and immune response, is more commonly seen in niches of free roaming, sexually intact dogs in the tropical regions throughout the world.2 It is most commonly transmitted between dogs through direct contact such as sniffing and mating (Question 3), making the genitourinary region the most common location for the development of this tumor.2 Other anatomic locations such as the oral and nasal cavities and around the muzzle and face are also places were this tumor can occur.2 Only viable cells can be successfully inoculated and the epidermis must be broken.2

Grossly, the tumor can consist of a single mass or multiple masses with an overlying ulcerated or traumatized epidermis from the host, leading to a hemorrhagic and serosanguinous discharge. The mass can grow up to 10-15cm2 and rarely persists for more than 6 months in immunocompetent dogs. Cytologically, it is described as a round or “discrete” cell tumor (see cytologic findings), which includes lymphoma, histiocytic tumors (e.g. histiocytoma), extramedullary plasmacytoma and mast cell tumor. Based on morphologic features, histiocytoma, plasmacytoma and perhaps lymphoma could be considered possible differential diagnoses. Given the location and the history of this dog, together with the cytologic findings, the cytologic diagnosis in this case was cTVT (Question 1).

It is interesting how a clonal population of cells can overcome biological limitations that prevent cancer. It is even more impressive how cTVT is transmitted to other dogs as a tissue graft, especially when we ponder on the rigorous compatibility testing between patients and donors and long-term immunosuppressive therapy required for successful organ donation and transplants. cTVT not only have acquired the appropriate mutations to no longer follow orders from its host (transformation), but the tumor has mastered a technique to not even require a single host for its survival. Cancer is a disorder of unregulated cell growth supported by acquired mutations affecting a single cell and its clonal progeny, leading to uncontrolled cell division, survival and growth advantages that are independent of physiologic signals. A neoplasm usually dies with its host, but this is not the case for some tumors, including leukemia of soft shell clams, Tasmanian devil facial tumor disease (DFTD) and cTVT.3–5

Recognition of tissues, as far as our understanding, is mediated through Major Histocompatibility Complexes (MHC), which are receptors on cell membranes that are unique for an individual and allow the immune system (lymphocytes and macrophages) to recognize a monumental variety of self- and non-self-antigens.1,6 It is of no surprise that cTVT express a minute amount of MHCs in their membranes during the initial phase of proliferation, making the tumor completely invisible to the immune system.1,7 On top of its “invisibility” technique, cTVT expresses transforming growth factor (TGF)-β, which is normally secreted by tissues during the healing and repair stages of tissue injury with the main goal of “calming” the immune system and allowing repair.1,8 In the case of cTVT, TGF-β suppresses the immune system, allowing the tumor to proliferate in an invisible protective cocoon.1,8  This protection does not last forever, since low numbers of the neoplastic cells do express MHC receptors, allowing the immune system to react to the “infection” in a tapered and progressive fashion. The cumulative immune response against the foreign tissue causes accumulation of inflammatory cytokines, such as interferon (IFN)-γ. The increase in IFN-γ concentrations triggers up-regulation of MHC molecules on the tumor cell membranes, leading to a targeted immune response against the tumor and regression of the mass within 4 to 6 months after its clinical appearance.1,8 How cTVT downregulates MHC expression is unknown, but is suspected to involve epigenetic re-arrangements.1,8 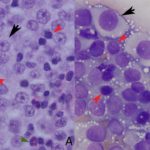 Figure 6: Cytologic and histopathologic correlate of the inflammatory infiltrate. A H&E stain, B Wrights stain, 100x.

Regression of the tumor has been associated with an inflammatory infiltrate, mainly involving tumor-infiltrating lymphocytes with lower numbers of eosinophils and macrophages.1,9,10 The lymphocytic infiltrate, characterized by an increase in T-lymphocytes, correlates with both spontaneous and chemotherapy-induced regression of the tumor.7,10 Lymphocytes can make up to 40% of the cells in cytologic preparations.10 The mechanism behind the eosinophil infiltration, as observed in the impression smears of these case (Figure 3, 5 & 6), is unknown, but appears to be a feature of some cTVT.9 The degree of inflammatory infiltrate will depend on the stage of regression of the tumor and may predominate over the neoplastic cells in late regressive phases. An abundance of inflammatory cells may prevent a definitive cytologic diagnosis (Question 2). The final destruction of the tumor is considered by some to represent simplistic death, almost a “weakness” of this tumor. But taking into perspective the clinical course of this disease, by the time the immune system is finally targeted against the tumor (~3 – 4 months), the affected dog has already encountered other dogs, perhaps many, allowing the long-lived cells to continue the journey in another host and the cycle starts again.

cTVT is estimated to be approximately 6,000-10,000 years old. It is speculated to have arisen from a wolf or an early domesticated dog.1,2,11,12 Historically, the tumor has been classified under a diverse gamut of names including infective granuloma, Sticker tumor, contagious lymphoma, lymphosarcoma, tumor of neuro–ectodermal cells or an aortic body tumor, histiocytoma, tumor of reticuloendothelial origin, round cell sarcoma and undifferentiated round–cell neoplasm of reticuloendothelial origin.1,2,7,13 The specific cell line the tumor arises from is unknown, but it appears histiocytic based on positive reactions for vimentin, CD18, lysozyme and α-1-antitrypsin (AAT).1,8,13 The ability of Leishmania infantum to infect tumor cells provides further support its histiocytic nature.14

Regardless of its cell lineage, cTVT is genetically very stable. The tumor has 58 to 59 chromosomes differing from the dog’s karyotype of 78 chromosomes.1,2,7 Genetic stability has allowed the tumor to survive in nature for an impressive time period, which is not commonly associated with cancer. As a tumor develops and continues to acquire mutations that provide advantages over other cells (Darwinian selection), it also loses or has the chance of losing important genetic data leading to catastrophe (for the tumor at any rate) and cell death. How cTVT has managed to overcome this is unknown. A few reports suggest that cTVT cells can sporadically trap mitochondria from host cells11,15, allowing the highly metabolic cells to acquire fresh machinery from the host with decreased aerobic glycolysis, thereby reducing the chances for genomic instability.

The treatment for cases of cTVT often involves surgical excision, chemotherapy or immunotherapy.2,7 If surgery is chosen, electrosurgical or cryosurgical excision is recommended to decrease the chance of viable cells re-inoculating tissues.2 Vincristine is considered to be the most effective single chemotherapeutic agent, with studies reporting extremely high rates of complete remission (an outcome not observed after administration of other chemotherapeutic drugs such as cyclophosphamide or methotrexate). Additionally, there were fewer side effects with vincristine.2,16,17

Canine transmissible venereal tumor is the oldest known somatic cell line11,18 of which we know so little about. Hopefully more research with regards to its biology, stability and epigenetic modifications will yield more light on this allogenic transplantable tumor. Furthermore, it might help us understand other naturally occurring allogenic tumors, such as the Tasmanian devil facial tumor disease and its devastating and aggressive behavior within this marsupial population, which is being pushed to the edge of extinction.4,5,8