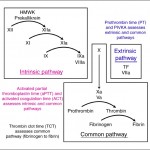 Screening coagulation assays and the cascade model of secondary hemostasis

Screening coagulation assays are the “bread and butter” of secondary hemostasis testing and consist of the prothrombin time (PT), activated partial thromboplastin time (APTT) and the thrombin clot time. The thrombin clot time can be modified to measure fibrinogen concentration. The activated coagulation time (ACT) is an in-house point-of-care test that provides some information on secondary hemostasis and is useful as a screening tool for severe coagulation factor deficiencies. Additionally, a clotting assay that is sensitive to deficiencies of vitamin-K dependent factors (PIVKA assay) can also be performed, but has largely fallen out of favor. Also the dilute Russell’s viper venom time (dRVVT) can be used to evaluate clot formation with the common pathway but is not done routinely.

Laboratories offer different screening assays, but most hemostasis or coagulation profiles consist of the PT and APTT at the minimum, which are interpreted together based on the classic cascade model of secondary hemostasis. The combination of results from coagulation screening tests (PT, APTT and fibrinogen) can be used to determine the defect is in coagulation factors, as shown in the image and table below. It is important to note that not all laboratories are created equal with respect to coagulation testing. Some laboratories, such as the Comparative Coagulation Laboratory at Cornell University, optimize testing to be sensitive to coagulation factor deficiencies. This may involve dilution of a specific reagent, evaluating which method of clot detection is optimal for a given species, or using different clot activators or reagents to measure clotting times. Coagulation screening assays are only sensitive to factor deficiencies and not a hyperactive or excessively activated clotting system (hypercoagulability), i.e. only prolonged times are of diagnostic relevance. Short clotting times do not necessarily mean a hypercoagulable state and should not be interpreted as such. Indeed, short clotting times are often a laboratory or sampling error. Interpretation of all assays should only be done with respect to clinical signs. Normal clotting assays in a bleeding animal do not rule out a defect in secondary hemostasis (because the used assay may not be sensitive) and prolonged clotting times do not mean the animal is bleeding due to a defect in secondary hemostasis (particularly if there were sample collection issues). It is critically important to collect samples properly for hemostasis testing. There are also differences in how people interpret the results (with respect to reference intervals, percentage change compared to controls etc). 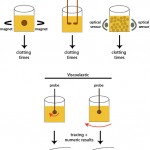 Most screening coagulation assays are based on how rapidly fibrin clots form in patient samples. Since citrate anticoagulated plasma is used for most of these assays, calcium needs to be added, along with a clotting activator. After addition of these reagents, the time for fibrin clot formation is recorded. Different activators will trigger different pathways.

There are different methods to detect the formation of fibrin in these assays, including the visual tilt tube method, mechanical,photo-optical and viscoelastographic techniques. These not only differ in how they detect the clot but also on the provided results.

The ACT is a useful screen for evaluation of the intrinsic and common pathways (see image above) and is performed in whole blood. The ACT relies on the patient’s platelets and calcium for provision of phospholipid to support the reaction. There are two ways of performing the test:

Only a prolonged ACT is a relevant finding. The test is somewhat subjective so mild increases in the ACT should be interpreted with caution. More sensitive screening assays (APTT) should be performed in animals that are bleeding with a normal or even mildly prolonged ACT (in animals with normal platelet counts). A prolonged ACT can be due to the following:

The prothrombin time (PT, also called the one stage prothrombin time  or OSPT) measures the activities of extrinsic and common pathway factors, with the exception of tissue factor (coagulation factor III), which is added as the clot activator along with calcium. Since tissue factor is never deficient in vivo, we can use it as an activator. Once these reagents are added, the time for clot formation is recorded. Canine and feline plasma clots rapidly in the PT (times are usually < 10 seconds), which can result in clot formation being missed, especially in photo-optical instruments optimized for use in human patients (who normally have PTs longer than 10 seconds). In addition, the short clotting times for the PT reduces the sensitivity of the assay. Some laboratories dilute their PT reagent to provide longer PT clotting times (in order to optimize sensitivity to factor deficiencies). A variety of sources of thromboplastin are available and these produce different times for the PT in the same species. Therefore, the PT should always be interpreted with respect to the species-specific reference interval provided by the laboratory and PT results from different laboratories are not directly comparable. Since a source of phospholipid is provided in the assay (as part of the tissue factor activator), this assay does not require platelets to support the reaction.

Only a prolonged PT is a relevant finding (as long as it is not due to an artifact of detection method). The PT should never be interpreted in isolation but always in conjunction with the APTT (see diagnostic algorithm, table summary below and image above) and, ideally, fibrinogen concentration.  This is because a low fibrinogen (<75 mg/dL in the dog and <50 mg/dL in other species) will prolong the PT (and APTT) independently of other clotting factor deficiencies (both tests rely on adequate fibrinogen to form the fibrin clot). Of all the tests performed at Cornell University, the sensitivity of the clotting assays to low fibrinogen are: TCT > APTT > PT.

The activated partial thromboplastin time (APTT) assay is an indicator of the function of coagulation factors in the intrinsic and common pathways. A surface activator (such as kaolin or ellagic acid, which activates factor XII), phospholipid, and calcium are added to citrated plasma at 37°C and the time to clot formation is recorded. Dogs have much shorter aPTT clotting times (15 – 20 seconds) than human patients (25 to 45 seconds), whereas healthy large animals have quite long aPTTs (> 40 seconds). The APTT is more sensitive to clotting factor deficiencies in the intrinsic and common pathways than the ACT (<30% versus <10% for the diatomaceous-based ACT) and also does not require platelets to support the reaction (due to added phospholipid in the reagent).  Individual factor activities usually need to be less than 30% to prolong the aPTT (although this % is dependent on the reagents and methods used), however mild deficiencies in multiple factors in the intrinsic or common pathways can prolong the APTT, despite individual factors not being <30%.

Only a prolonged APTT is a relevant finding (as long as it is not due to an artifact of detection method). The APTT should never be interpreted in isolation but always in conjunction with the PT (see diagnostic algorithm, table summary below and image above) and, ideally, fibrinogen concentration.  This is because a low fibrinogen (<75 mg/dL in the dog and <50 mg/dL in other species) will prolong the APTT (and PT) independently of other clotting factor deficiencies (both tests rely on adequate fibrinogen to form the fibrin clot). The APTT is more sensitive than the PT to low fibrinogen (but less sensitive than the TCT).

The thrombin clot time (TCT) is a direct measurement of functional fibrinogen, because it assesses the ability of added thrombin to form a fibrin clot. The TCT is the time taken for a standardized thrombin solution to convert fibrinogen to fibrin to form a clot. Clot formation is decreased (which will prolong the TCT) if there is a deficiency of (hypofibrinogenemia) or abnormal (dysfibrinogenemia) fibrinogen. Furthermore, any other factors inhibiting fibrin polymerization will prolong this test, without there being any abnormalities in fibrinogen. This is the technique used by the Comparative Coagulation Laboratory at Cornell University for measurement of fibrinogen in citrated plasma samples (and is usually a part of their routine coagulation panel).

Only a prolonged TCT is a relevant finding (as long as it is not due to an artifact of detection method). The TCT should never be interpreted in isolation but always in conjunction with the PT (table summary below and image above) and APTT.  However, the TCT is more sensitive than the APTT or PT to low fibrinogen. The TCT may be prolonged under the following situations:

The vitamin K-dependent coagulation factors (FII, FVII, FIX, FX) are produced in the liver as nonfunctional precursors. These precursors are activated, in the presence of vitamin K, by carboxylation of their glutamic acid residues. This is achieved with the aid of an enzyme called γ glutamyl carboxylase. Carboxylation of these amino acid residues increases the negative charge of the protein and allows these coagulation factors to bind calcium, which is essential for the adhesion of these factors to platelet phosphatidylserine and formation of highly active enzymatic complezes (which is necessary for fibrin formation). In the absence of vitamin K, there is an increase in these non-functional factors in the circulation, as well as a depletion of the functional activated coagulation factors. The inactive precursors that accumulate in the circulation are called Proteins Induced by Vitamin K Antagonism or Absence (PIVKA).

The PIVKA test or thrombotest is actually a modification of the PT and does not measure the inactive precursors per se. The test uses diluted plasma (which creates longer clotting times than the PT) and a specific thrombotest reagent, which is reported to be most sensitive to deficiencies in factor X. Although claims have been made in the veterinary literature that this test is sensitive to both an increase in PIVKAs (which are supposed to inhibit the reaction) as well as a decrease in the functional coagulation FII, VII, and X (especially FVII and X), there is no proof that PIVKAs actually inhibit the reaction. Therefore, the PIVKA test should be considered a modified PT that detects deficiencies in FII, VII, and X and the term thrombotest versus PIVKA should be used when referring to this specific clotting assay. Because the thrombotest clotting times are longer than the PT, the test may be more sensitive than the PT for abnormalities in these factors, however this was not supported by a study measuring thrombotest, PT and APTT in dogs with various hemostatic disorders. Furthermore, the test is only offered by certain laboratories and the turnaround time is longer than the PT, therefore measurement of the thrombotest offers no advantage over the PT. The test has gone out of favor in veterinary medicine and is rarely used anymore. In human patients, the nonfunctional noncarboxylated coagulation proteins are measured specifically using immunologic tests.

Results are interpreted similarly to the PT. Decreased thrombotest times are not diagnostically relevant, however difficult venipuncture may activate clotting factors leading to a falsely normal (instead of prolonged) thrombotest. Results are normal in dogs with inherited deficiencies of coagulation factors VIII, IX, and XI, and prekallikrein. Prolonged values could be due to the following:

The table below provides a brief summary of using combination of screening coagulation test results – the PT, APTT, and TCT – to help determine where the defect is in secondary hemostasis. The list of disorders is not exhaustive.