Automated hematologic analyzers (electrical impedance- or laser-based) can measure platelet volume (MPV), just like they can measure red blood cell volume (MCV). The MPV can be useful for  distinguishing between causes of thrombocytopenia (just like the MCV can provide guidance as to causes of anemia), but should never be used in isolation. During active thrombopoiesis, larger platelets than normal may be produced (similar to immature anucleate RBC, which are usually larger than mature RBC). These larger platelets can be observed in blood smears and, if in sufficient number, will increase the MPV above reference intervals. Large platelets are generally presumed to be young platelets, however, large size is not synonymous with immaturity. Also, there is a substantial degree of variation in platelet size in healthy animals, particularly in some species, such as cats, so identification of large platelets in a thrombocytopenic animal depends on the species, number and appearance of the platelets. 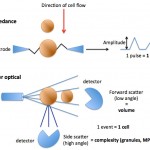 This can be done with impedance or optical based analyzers:

With both techniques, the different sized platelets in the sample can be represented on a frequency distribution curve of proportion of platelets versus platelet volume and the analyzer can provide results for mean volume of platelets (MPV). The histogram curve is usually asymmetrical (most platelets are small versus large in size).