The segmented leukocytes in some dog breeds, notably the Australian Shepherd, but also other breeds including Foxhounds, Samoyeds, Basenjis and mixed breed dogs (Bowles et al 1979, Breitschwerdt et al 1984, Latimer et al 2000, Vale et al 2011), can have a nuclear defect, such that the segmented neutrophils mimic band and more immature forms (metamyelocytes, myelocytes). However, the cells have clumpy mature chromatin and no evidence of toxic change, as would be expected with a severe left shift. This is called Pelger-huët anomaly (for images, refer to the canine blood gallery under the hematology album). Human patients with this disorder have a genetic defect in the nuclear envelope lamin B1 receptor (Hoffman et al 2002). Eosinophils can also lack obvious segmentation in dogs with this disorder (Aroch et al 1996). Despite the abnormal appearance to the neutrophils, function, including movement, appears normal (Latimer and Prasse 1982, Latimer et al 1989). Pelger-huët anomaly has also been reported in rabbits (Nachtshein 1950), Arabian horses (Gill et al 2006, Grondin et al 2007) and rarely in cats (Deshulliers et al 2014). We have also seen some cases in Arabian horses at Cornell University.

Pseudo-pelger huët anomaly is when neutrophil hyposegmentation is seen secondary to an underlying disorder, such as chronic infection (Shull and Powell 1979) or myelodysplastic syndrome (MDS) in humans (Shetty et al 2001). With MDS, neutrophils take on a “pince-nez” shape (eyeglasses joined by a short wire), being bilobed, with the lobes separated by a thin chromatin strand. 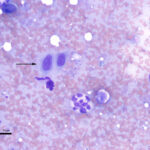 Giant hypersegmented neutrophil in a goat

Hypersegmentation of neutrophils can be seen under various conditions and indicates either aged neutrophils with increased lifespan (presumed to be the mechanism behind hypersegmentation associated with corticosteroid therapy), abnormal neutrophil production (dysplasia, such as associated with feline immunodeficiency virus infection [Fujino et al 2009], myelodysplastic syndrome or acute myeloid leukemia, vitamin B12/cobalt/folate deficiency) or an inherited condition (e.g. Quarterhorses [Prasse et al 1981, Ramaiah et al 2003, Tvedten and Riihimäkhi 2007] or toy or miniature poodles with macrocytosis [Canfield and Watson 1989]). With corticosteroids or an inherited defect, the neutrophils are usually normal in size, however with dysplasia, neutrophils may be abnormally small or large in size, which can be a helpful discriminator. 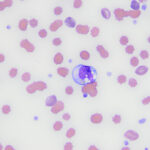 Bilirubin crystal in a monocyte

Various different inclusions can be seen in neutrophils in blood, including parasites (see the infectious agent page or the infectious agent gallery). Hemosiderin can be seen in neutrophils and monocytes in animals with hemolytic anemia, usually with an intravascular component. Presumably, the free hemoglobin is taken up by scavenger receptors (e.g. CD163, the haptoglobin receptor on monocytes) and the porphyrin ring is converted to unconjugated bilirubin, which is then exported into plasma. The iron within the heme ring is modified to hemosiderin, which is seen as a golden brown to dusky blue-gray pigment in the cells. Such cells are called sideroleukocytes (iron-containing leukocytes). In rare instances, the bilirubin may present as slender bright yellow to rhomboidal crystals (also called hematoidin) within the cells (see image). For more images of sideroleukocytes and bilirubin crystals within blood leukocytes, refer to the hematology atlas (canine blood, WBC features).  Hematoidin is rarely seen in blood cells and more commonly seen in cytologic specimens in areas of hemorrhage and hypoxia (bilirubin crystals form under conditions of hypoxia). It also possible that blood leukocytes, such as neutrophils and monocytes, which are scavenger cells can obtain hemoglobin from phagocytosis of red blood cells in tissues (e.g. spleen, liver) as part of the hemolysis or underlying tissue hemorrhage and then migrated back from tissue into blood (reverse transmigration [de Oliviera et al 2016]).